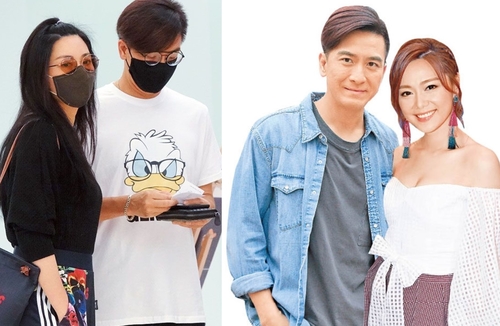 Yesterday, Miss Photogenic of the Miss Hong Kong 2012 pageant, Jennifer Shum (岑杏賢), announced her engagement to boyfriend, Kelvin, on Instagram. Her close friends, including her fellow pageant sister, Roxanne Tong (湯洛雯), threw her a party to celebrate both her October 9 birthday and engagement. Given that Roxanne and boyfriend, Kenneth Ma (馬國明), were spotted house hunting earlier, many were curious if she would be next in line to tie the knot.

While Kenneth previously expressed in an interview that he will save money to buy a property for marriage, Roxanne disclosed, “To be honest, [those pictures] of Kenneth and I on a date are from four months ago. We already forgot that we looked at real estate, so news of us liking the housing in Repulse Bay is not true. However, we aren’t just dating for fun because we do see marriage in our future.”

She added that they have yet to discuss marriage in-depth because they are both busy with work – especially Kenneth, who has several dramas lined up – and will further explore that topic once work slows down. The actress explained they are both working hard to earn more money first, as they hope to give their families a better life.

Roxanne continued to share, “We also haven’t been dating for very long, so we hope to learn more about each other before deciding the next step. Don’t worry, everyone! We are in a steady, healthy, and happy state. Thank you for everyone’s concern.”