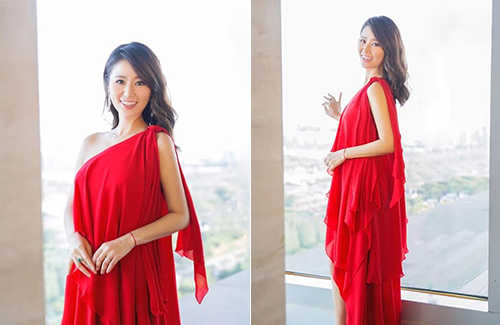 The Taiwanese actress, who is four months pregnant, dropped the gender hint when reporters asked if she is already looking into baby products. Ruby smiled and said, “I’m definitely going to buy pink baby products!”

Ruby and her husband, Wallace Huo (霍建華), haven’t shared anything about the gender of their baby yet, but at last week’s Bazaar Charity Night in Beijing, both Ruby and Wallace said they had no preference in gender. “Either one is good,” said Wallace. “I’ll love it all the same.”

Now that Ruby seems to be set for pink, it is likely that the couple are expecting a baby girl. However, it is also important to note that pink has always been Ruby’s favorite color—it’s entirely possible that Ruby’s going to get pink baby products regardless if the child is a boy or a girl.

Ruby and Wallace, who have been friends for over a decade, took their relationship to the next level earlier this year. They tied the knot in a romantic wedding on July 31, 2016 in Bali. Ruby confirmed her rumored pregnancy this month.