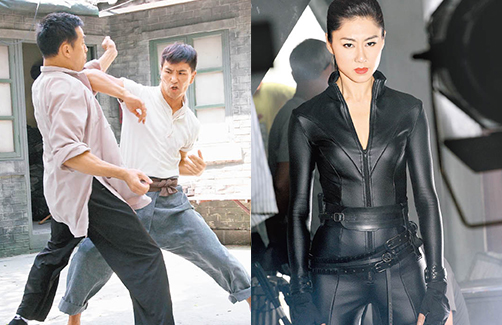 First time costars Ruco Chan and Nancy Wu have been busy doing outdoor photography for the action-packed series in the last few days. Portraying physically-demanding roles, Ruco and Nancy said they lost around five to six pounds since filming began in early August.

“I have many fight scenes,” Ruco shared. “But I really enjoy doing them because they’re very realistic and gritty. I lost a lot of weight filming this drama, but it’s not a bad thing, because now I feel much more flexible and agile.”

Ruco is starring with Tony Hung (洪永城) and Grace Chan (陳凱琳) in the TVB anniversary drama Captain of Destiny <張保仔>, which is currently airing. In regards to the rumors that he did not get along with Tony while filming the series, Ruco said, “I’ve been busy [with Heroes of the Walled City] so I haven’t been promoting Captain of Destiny. I’m also not very newsworthy, so these rumors are actually helping me promote the drama. As long as it doesn’t hurt my friendship with Tony, I don’t mind if these rumors get worse.”

“The suit is tailor-made,” said Nancy. “I really like it! I lost a few pounds since this was made, so the pants are pretty loose now, but it’s a perfect fit after all the wire work is set in place.”

Nancy trained hard for her role and regularly works out at the gym. “It’s a huge challenge,” said Nancy. “I have scenes where I have to do a few action moves in one shot.”