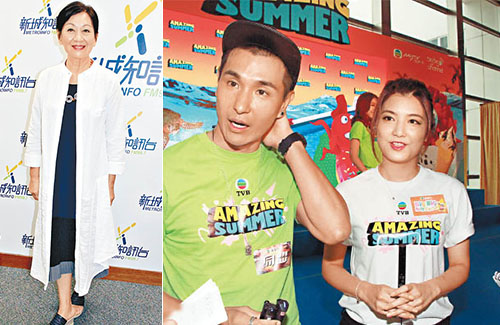 At a radio show to promote their new TV drama The Unholy Alliance <同盟>—which Ruco had to skip out on last minute—the former ATV actress may have accidentally revealed Ruco’s currently relationship status.

“He’s busy!” said Nina when asked why Ruco wasn’t available to promote the show with her. In the new drama, Nina and Ruco play mother and son, their second time since ATV’s 2007 drama Stupid Child <笨小孩>. At the mention that Ruco got upset when rumored girlfriend Phoebe Sin was mentioned at an earlier promotion event, Nina said, “It’s true that he rarely talks about those things with us. Sometimes I do get curious myself and ask him, like: ‘Are you dating now?’ ‘Yes, mom!’ You know? Those kinds of questions.”

Did Nina just accidentally reveal that Ruco is dating?

“No! I’m not trying to reveal anything!” Nina said quickly. “I’m just thinking that since my son is already all grown up he should be dating. That’s why when you guys asked, I just assumed he was. I would ask these questions on WhatsApp, and he would reply with a smiley face. I actually don’t know anything!

In a phone interview with Ruco later on that day, the actor explained that he missed the radio show because he had to take his mother to a doctor’s appointment. Mentioning that Nina may have accidentally revealed his relationship status with Phoebe, Ruco laughed and said, “Haha! This mom is silly. I just told her that if I was dating I’d bring my girlfriend to visit her!”

He then clarified that Nina had always wanted him to find a girlfriend, and at one point even tried to set him up with someone. Asking when Ruco plans to visit Nina with Phoebe, he said, “If there’s an opportunity for collaboration, they’ll probably meet then.”

Ever since dating rumors between them started earlier this year, Ruco avoided talking about Phoebe. He explained, “I don’t want to talk about her because I’m worried about how the reports would write about her. If it gets too negative, it can affect her life’s image. She would have it much worse than me. I can’t make her go through that.” (You’re very protective!) “There’s no other way. She still hasn’t given the audience anything to work with yet. It’s not like me. You guys can write about me. I have a safeguard. It’s not hard to admit [dating], but it is all about timing. If everyone’s happy, then it’ll naturally happen. Time can prove so many things.”