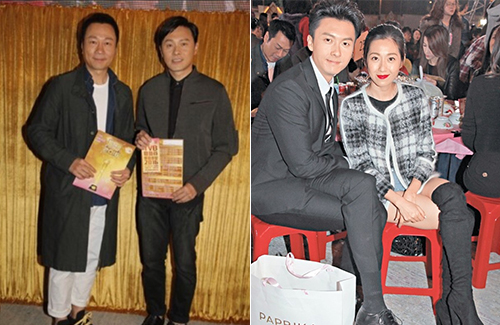 Short End of the Stick’s <公公出宮> Wayne Lai and Raymond Cho are respectively in the run for Best Actor and Best Supporting Actor. Wayne, who has won Best Actor three times, said he’s working hard to rally votes for Raymond. But when asked for his thoughts on winning the Best Actor award himself, Wayne instead gave his vote for Dead Wrong’s <致命復活> Roger Kwok (郭晉安).

Raymond wholeheartedly thanked Wayne for the support, but nonetheless joked, “You’ve never supported me in all these years. You’re only supporting me now because we’re in the same drama!” Wayne then suggested Raymond to strip off his clothes to attract votes, and then added with a laugh, “You better prepare your speech now. I don’t know if you’ll get that opportunity later!”

Wayne’s TV King competition includes Vincent Wong, this year’s breakout star from Over Run Over <EU超時任務>. Vincent attended the artistes banquet with his wife, fellow actress Yoyo Chen (陳自瑤), who urged her fans to save their votes for Vincent.

“He was so good in Over Run Over,” said Yoyo. “He is already the TV King in my heart!”

Vincent laughed and said, “Then that means I’ve already won TV King!” The Over Run Over actor said he considers A Fist Within Four Wall’s <城寨英雄> Ruco Chan as one of his strongest opponents, and jealously said, “Yoyo wouldn’t be able to take her eyes off him whenever he’s on TV!”

Nominated in four categories, does Vincent have the confidence to win at least one award? He said, “I think the Drama Theme Song award will go to Ruco Chan and Nancy Wu (胡定欣)! They swept all the trophies in Singapore and Malaysia. When they perform together, the fireworks they sent off can definitely kill!”

Hot favorite Ruco Chan, who already won TV King in Singapore and Malaysia, has decided that it is best to keep expectations low and just enjoy awards night to the fullest. “I do feel much more at ease this year compared to previous years,” he said. “But I will take things as they are. If I can’t win this year, I’ll try again next year!” (Will you be voting for yourself?) “I’m voting for Wayne Lai. He films several dramas in a year, and each one gives off a different feeling. That’s not easy to do at all.” (How about Nancy Wu?) “Of course! She’s my good friend and my costar. It’s going to be her this year! She better treat me to a few meals!”

A Fist Within Four Wall’s Grace Wong (王君馨) and Two Steps from Heaven’s <幕後玩家> Katy Kung (龔嘉欣) are both popular contenders for Best Supporting Actress. Katy said she and Grace will be voting for each other.

Grace said that her close friend, Eliza Sam (岑麗香), will be getting married on the same day as the Anniversary Awards. Eliza, who is nominated for Best Actress, encouraged Grace to stay in Hong Kong to attend the awards, as seeing Grace win would be her best wedding gift.

The TVB Anniversary Awards will be held on Sunday, December 18, 2016.