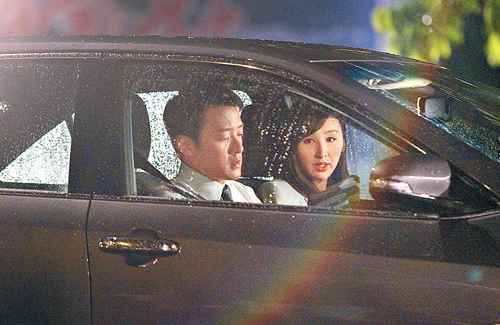 TVB actress Samantha Ko (高海寧) and her costar Jason Chan (陳智燊) were earlier spotted shooting their new series Love Food Chain <愛情食物鍊> in the middle of the night. The scene took place in Central, where Samantha completed several takes of running through heavy rain. Despite being soaked to the core, she was not too concerned and maintained a professional attitude.

In the series, Samantha’s character is a marketplace fish seller, but she also has an elegant side. She appeared on set in Central wearing a short white dress and a pair of four-inch high heels that showed off her long legs. Before the camera started rolling, Samantha stood under the streetlights to study her script. She also chatted happily with the crew in the meantime.

After the positions were tested, the fake rain machine began to water. Samantha used her purse to shield her head from the rain and ran quickly through the streets in her heels. She was soon soaked in her white dress, which clung to her body and revealed her curvaceous figure. Samantha repeated the scene several times before it was successfully completed. She was not too bothered about being all wet, and only wiped the water away on her face.

On the other hand, Jason was lucky and did not have to be out in the rain. He sat in a car the entire time, which is supposed to be part of the following scene. Samantha then boarded Jason’s car and the two continued filming.