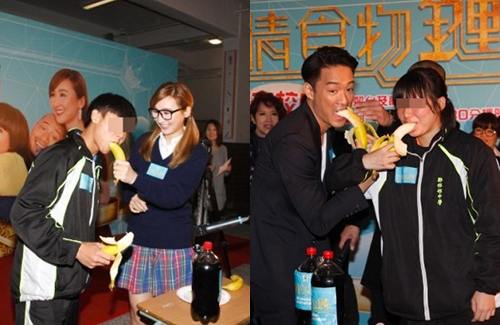 King Kong (金剛), Jason Chan (陳智燊) and Samantha Ko (高海寧) made an appearance at a primary school in Tseung Kwan O to promote their television drama Love as a Predatory Affair <愛情食物鏈>, which is currently airing to much popular success.

At the promo event held yesterday, the cast members interacted with primary school students and played games with them. Although it appeared all fruit and fun at first, the games sparked some brief controversy when Samantha had a male student peel off the banana she was holding with his teeth. Reporters said the game looked a bit too suggestive.

“It’s just eating fruit,” said Jason. Samantha agreed and said, “Using his teeth to peel the banana made it more challenging. Next time I should suggest he use his feet,” Samantha added with a laugh. She said she was supposed to do the same thing as well, but because she was wearing braces, she asked Jason to peel the banana in her place.

“But we will reflect on this,” said Samantha, acknowledging the criticisms. Jason stressed again that it was just a simple game and asked the reporters to not make it complex.

Love as a Predatory Affair is currently the highest-rating television program of 2016. Jason and Samantha said they are ecstatic about the ratings and hope it will continue to rise.

Samantha, who appeared at the event wearing a school uniform, was very popular among the students at the event. Asking if she was a popular student herself, she said, “Quite a few older students pursued me, but none of them were successful. I was too focused on my school work. Jason professed that he attended an all-male school and never had the opportunity to pursue girls. Despite his lack of experience in romance, he never once questioned his sexual orientation. The actor will be marrying longtime girlfriend, Sarah Song (宋熙年), at the end of the year.

Rumored to be dating music producer Tang Chi-wai (鄧智偉), Samantha was put on the spot when King Kong asked her to kiss Jason like she would kiss Tang Chi-wai.

“It was all fun and jokes,” said Samantha. “I expected this to happen and I’m used to it. I’m not offended at all.”