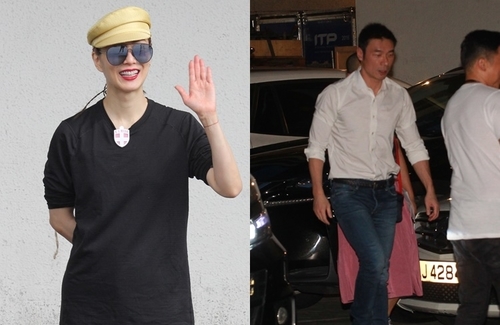 After successfully completing 13 shows at the Hong Kong Coliseum last Sunday, Sammi Cheng (鄭秀文) expressed she needed to go on a vacation to take a good rest. At the time, reporters asked her if she would be traveling with her husband Andy Hui (許志安), but she only said she would be going with a big group of friends. This afternoon, the couple was spotted at the airport by netizens.

Although they were flying to the United Kingdom for a holiday, both of them were very low-key about it. Sammi wore sunglasses while Andy wore a mask. Good friends Dicky Cheung (張衛健) and his wife Jess Zhang (張茜) were also on the same flight. They were probably visiting Mark Lui (雷頌德) and his wife, who moved to the UK, as well as celebrating Sammi and Andy’s birthdays.

With Sammi’s 47th birthday on the 19th of this month and Andy’s 52nd birthday a couple of days before hers, they will most likely spend it overseas together. After Sammi completed her concert, she busied herself with pre-celebrating her birthday with good friends, such as Johnnie To (杜琪峯) and Louis Koo (古天樂) – even during the No. 8 typhoon.

Things are looking good for Andy and Sammi following Andy’s cheating scandal with Jacqueline Wong‘s (黃心穎) this past April. Sammi decided to forgive her husband for the affair, and Andy even held a press conference to apologize in addition to suspending his work. Afterward, Andy was often seen accompanying Sammi at the gym, and he also attended all her shows backstage. However, he did not dare to sit in the audience, because even his appearance in the background of Sammi’s selfie triggered a hot discussion among netizens.