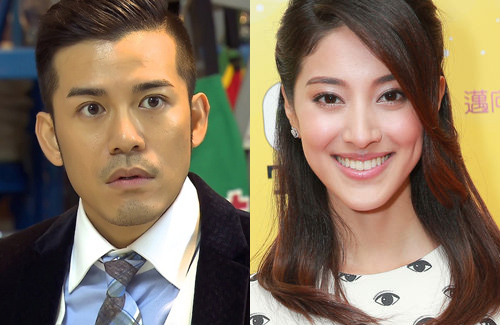 Sammy Sum (沈震軒) and Grace Chan (陳凱琳) are nominated for the Most Improved Artiste awards at the 48th TVB Anniversary Awards, which will be held on December 15. Well-liked by viewers, Sammy and Grace share their feelings over their chances at the awards ceremony.

Sammy added that filming for Line Walker was physically straining. “In the scene where I had to go on a bicycle chase after a thief, I fractured my wrist. It was the toughest filming experience I’ve endured. Each night, at the end of filming, I would take note of the various injuries I inevitably suffered. However I’m glad that these injuries helped make my undercover agent character look more realistic.”

As for his chances of winning the award, Sammy said candidly, “I’m not particularly nervous. My odds are probably 50:50. My biggest competitor is probably Louis Cheung (張繼聰), who is good at playing both positive and villainous roles. I think he has a big chance [in winning].”

Since winning Miss Hong Kong 2013, Grace Chan (陳凱琳), has been heavily promoted. Apart from being the emcee for large-scale events and hosting variety programs such as Organized Dining <搵食飯團>, Grace was also given a substantial supporting role in her debut drama, Overachievers <名門暗戰>.

Nominated for the Most Improved Actress for her performance in Overachievers, Grace may have the least experience out of all the nominees, but she still has a good chance due to her rising popularity among viewers.

Grace, who is currently filming Captain of Destiny <張保仔> in Hengdian, spoke about the TVB Anniversary Awards, “Getting a nomination for my first drama role has exceeded my expectations and I’m overjoyed. I wanted to experience the TVB Anniversary Awards atmosphere, but I’m filming in Hengdian now and will need to go to Wuxi to continue filming for the drama. I will not be able to attend the awards ceremony this year.”