Selena Lee Affected by Brexit, Will Work Harder in Career to Recover 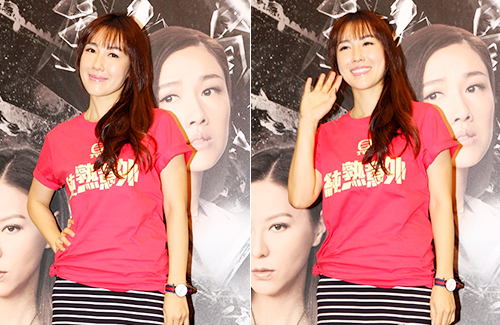 The past few weeks haven’t been very kind to Selena Lee (李施嬅). Not only is the media pitting her against Sisley Choi (蔡思貝) due to the “female lead crisis” rumor, but Selena also suffered a pretty big blow from Brexit—the British exit from the European Union.

In an off-stage interview to promote Presumed Accidents <純熟意外> last weekend, Selena was bombarded with questions about the gossip surrounding her and Sisley Choi, which claimed that the two of them couldn’t get along due to Sisley snagging the female lead role away from Selena, her senior of ten years.

Selena said she was upset—but not because of her rumor with Sisley. After the Brexit decision, the British pound sterling crashed to its lowest level in over 30 years, and Selena, who had invested a six-figure sum on UK stocks, lost a lot of money.

“I had purchased some British stocks and blue chips,” shared Selena. “I’ve always been careful in my investments, but I wasn’t expecting this to happen. The stocks are dropping rapidly. Right now, my only hope is to move ahead in my career. I also purchased an off-plan property in Canada, but the Canadian dollar is falling as well. Investing has been quite strenuous for me.”

After the TVB event, Selena said she and a few of her friends will donate blood, hoping to bring some positive energy back in.

To prevent the “female lead crisis” to happen again, Selena was asked if she would be more selective in her drama offers. She said, “Many people like to think that I don’t care about filming dramas and that I just want to enjoy life, but that’s not true. Since my debut, I’ve never turned down a single drama. I hope I’ll get more opportunities in the future.” She added that she is currently in discussions for another upcoming TVB drama.

“Actors are very passive. If the company offers us a drama, we usually do not turn it down,” she clarified.

8 comments to Selena Lee Affected by Brexit, Will Work Harder in Career to Recover