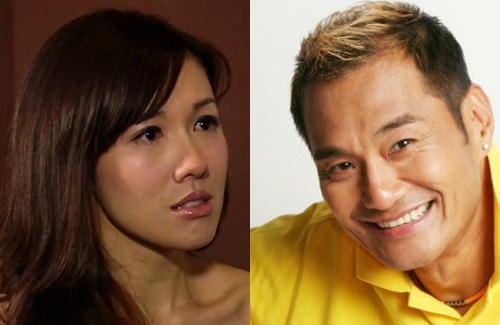 In the first episode, which was about a ghost occurrence that occurred in the now defunct East Town Theatre in Wan Chai, Selena played the role of a dim sum waitress who was groped in the butt by her customer (Ricky Wong). Before filming the scene, Selena had slipped on some extra padding to protect her bottom. When they were done with the scene, the director requested it to be filmed again so additional close-up shots could be taken. Assuming that they were only filming head shots, Selena removed her protective padding and reenacted the scene again with Ricky.

Perhaps due to miscommunication with the staff and with Selena, Ricky stayed in character and groped Selena’s butt again, only realizing then that Selena was not wearing her protective pad anymore.

An insider said that Selena’s face “immediately darkened” when Ricky touched her. The crew grew silent. Even Vincent Wong (王浩信), who was standing aside, grew stiff and sensed the awkward atmosphere. Ricky, however, did not immediately apologize and even joked to the crew, “Awesome, I got to touch a pretty lady’s butt today!”

Ricky: “I Am Willing to Apologize”

The director personally called up Ricky that same day to ask about what happened. The following day, Ricky’s wife visited the film set and apologized to Selena, who accepted the apology and continued to work with Ricky without much embarrassment.

In a later interview, Ricky explained that the groping was a misunderstanding. “In that scene I was supposed to touch her butt. I watched her wear the protective pad. However, I didn’t know she later removed it and that only close-up head shots were taken, so I just continued to do what I did earlier. Once I touched her, I knew I screwed up! But I already touched her, and there is no turning back, so I just continued on with the filming!”

Ricky was criticized for adding fuel to the fire when he joked about finally touching “the pretty lady’s butt”. Ricky said, “I’m always joking! But if she feels uncomfortable about what I said, I’m willing to apologize. I have no problem with that. I’m sincerely sorry for what happened. I didn’t mean it!”