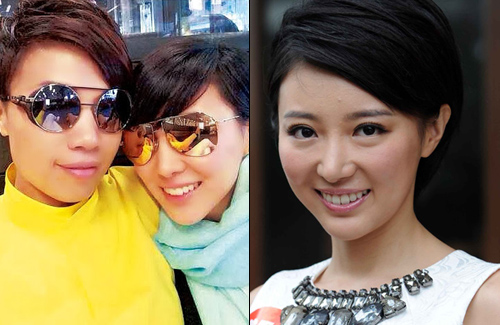 After Sire Ma (馬賽) apologized for mishandling her former lesbian relationship yesterday, ex-girlfriend, Wang Ziqi (汪子琦) called Sire a liar and said that she had fabricated everything.

In November, Sire had initially denied her lesbian relationship with Ziqi and said the media falsified the rumors. She was caught lying when a video of her kissing Ziqi emerged. Ziqi’s ex-girlfriend, Laura Lee, said that Sire was a materialistic schemer who had stolen Ziqi from her. Tabloid reports claimed that Ziqi gave Sire a monthly spending allowance of $200,000 HKD and the couple had burned away cash at a Singapore casino last month. Hoping to curb the negative backlash, Sire addressed the press and admitted that she had handled the incident the wrong way. Sire said that she and Ziqi had already broken up.

On her Sina Weibo blog today, Ziqi lashed out at Sire. Ziqi wrote, “I once thought that this was the truest love, but after running around a thousand miles, I realized that it was only a scheme. Over the last three months, I gave my truest feelings and attentive care, but this was in exchange for your constant lies! In the last few years, I have learned to slowly accept the unexpected, the cruelty of reality and human ruthlessness.  My heart is hurting and I feel despair…but I’m truly sorry [for hurting] Laura! ‘Because of understanding, there is compassion’–not everyone is qualified to make this statement!”

Ziqi’s last line, “Because of understanding, there is compassion” is a direct jab at Sire’s hypocrisy, as Sire had written the same phrase on her Weibo blog several weeks earlier.

Sire Does Not Let Ziqi’s Criticism Hurt Her

Rehearsing for an upcoming TVB charity show, Sire spoke with reporters today. Her voice was broken and her face in sorrow, but Sire did not shed any tears. Regarding Ziqi’s remarks that Sire had constantly lied in their relationship, Sire said, “I do not want to say something that will hurt other people” and added, “Truly letting go is not hearing, not seeing, and not getting hurt by words anymore; I hope I can do this. I wish her well in everything.”

Sire did not respond on questions on how the relationship had ended, only saying, “Everything is already past…. After waking up from the dream, everything has already ended.”  Asked if TVB had pressured her to end the relationship, Sire said it was her own decision and hoped to focus on her work for now.