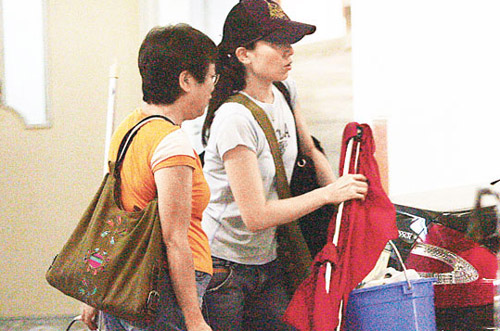 Sonjia Kwok (郭羨妮) will be marrying mainland martial choreographer, Zhu Shaojie (朱少杰)  next year. It was known that Sonjia had earlier took advantage of the temporary property market downturn to buy up her rented Clear Water Bay Oscar By The Sea apartment at an understated price of $5 million HKD. However, Sonjia denied that she was subsidizing her own hard-earned money to build up their love nest. She even revealed that her future husband-to-be was working hard to earn money to buy a property in mainland. Sonjia also professed that as long as one is wealthy in the heart, nothing else matters and did not mind her other half being labelled as a poor choreographer.

During July last year, when Sonjia filmed mainland drama, Palace <宮鎖心玉> she became acquainted with mainland choreographer, Zhu Shaojie, and things went on from there since both of them got along really well with each other. The couple dated for months and it wasn’t long before they decided to get married.

Because there was a huge disparity between Sonjia Kwok’s and Zhu Shaojie’s fame in the industry, his income was obviously miles apart from his fiancee, Sonjia. This led to many labeling of him as a “poor martial choreographer.” However, Sonjia who placed love above all, disregarded the ugly labels and even recently purchased her rented Oscar By the Sea apartment in Clear Water Bay in a discreet manner.

According to sources, Sonjia had always kept an eye and monitored the property market movements. Thus, as soon as the property market was in a temporary recessionary phase, Sonjia immediately striked out to accumulate her wealth. Browsing through past findings, Sonjia had a shrewd mind and instinctively left the property scene just before the financial tsunami occurred in 2008, thus earning her a profit of $400,000 HKD, afterwhich she moved into the rented Oscar By the Sea apartment with her mom.

Since the property owner was willing to lower the price and give up his beloved apartment, Sonjia saw this as a great opportunity to enter the market and bought up the rented apartment to make it her own, thus forking out $5 million HKD for this premium unit, in a bid to consider for the future.

Sonjia accepted an interview over the phone yesterday and admitted that she had entered the property market again to become a property owner. However, she refused to disclose the apartment price and said, “It wasn’t too expensive hence I was able to buy it up!”Asked if it was bought under the joint ownership of Zhu Shaojie and herself, Sonjia denied and replied, “It had nothing to do with him. My mom didn’t want to move here and there all the time so I thought of buying a stable home for her. (Aren’t you worried that outsiders would criticize about subsidizing the joint love nest with him with your own money?) No, I’m not worried. Shaojie will not be living in Hong Kong; he will be staying in mainland to advance his career.”

He Will Give Me Everything I Want, Definitely Not Poor

Speaking about her fiancé, Zhu Shaojie, Sonjia pointed out that their love nest would most likely be situated in Shanghai or Beijing, “We plan to buy an apartment in both places hence he is saving up some more money now! (Whose name will the property be under?) Haha, of course it will be under my name!”

Being loyal in her love and feelings, Sonjia disregarded the accusations of her fiancé being a “poor martial arts choreographer.” Sonija laughed and said, “I don’t care what people say, Shaojie doesn’t take it to heart too, nothing matters as long as we are wealthy in our hearts. In any case, everything and whatever food I want, he would give it to me so how is that considered poor?”

It was known that Zhu Shaojie was actually multi-talented with many skills on hand, besides being a choreographer, he was also also a director and producer and was even busy filming a new drama in Mainland.