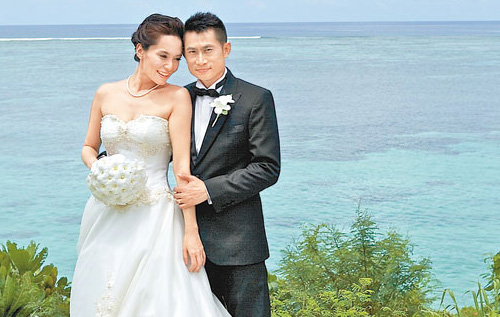 Regarding her perspective in love, Sonija Kwok (郭羨妮) lamented that it was difficult for an artist to find a significant other. In fact, Sonija was only interested in seeking a practical person. Instead of dating haphazardly, she chose to stay single in the past instead. Believing that love was destined, Sonija ultimately met practical and reliable husband, Zhu Shaojie (朱少杰), as Heaven’s gift.

“In the past, I never knew what I was looking for in a partner; thus I waited for the right person to appear. It appears that working in the entertainment industry does not allow dating. When it gets busy, there is no time for dating. It is also very difficult to come across a suitable person. Since I was filming non-stop earlier, I was unable to meet the person I had in mind. In fact, my requirements are very simple; I am looking for a man that resembles my husband. He is a practical and down to earth man, giving a sense of security and not letting me worry.”

Dating Only A Handful of Men

“If you were to ask me whether I possess a suspicious nature during dating, it depends on the other person. The issue is also related to age. At my current age, I believe it is important to possess some confidence in myself, while giving the other person confidence as well. It is a mutual exchange! I am not the type of woman to easily fall in love. You can count the number of times I have officially dated in one hand! Earlier, I considered giving up; settling on remaining single! It is better than to find someone haphazardly. However, love is destined and unexpectedly, the right person surfaced.

“When I worked as a flight attendant, I dated another male flight attendant. He was also a practical person and quite handsome! Since we were colleagues, naturally we started dating. If I did not enter the Miss Hong Kong pageant, perhaps I may have married him! We dated for several years, even during my participation in the pageant.

“Afterward, I felt that we belonged to different worlds and broke up six months later. I asked for the break up since we were both very young and his qualifications were not bad, many women were interested in him. I felt as if I were slowing him down, thus asked to break up. He is currently married and has children. At that time, I was naturally focused on my career since I had just entered the industry. Meanwhile, he was considering when to get married. We both had pressure, so perhaps breaking up was the better option!”

Jayne: I think it is quite rare that Sonija is speaking so candidly. In the past, she always appeared to be tongue-tied and did not know the right words to present herself well. Perhaps this may be one of the reasons why Sonija was not promoted as heavily as Charmaine Sheh, although both are quite beautiful and entered the industry at the same time.

Thinking back to Sonija’s rumors with Michael Tao, allegations were that Sonija broke up Michael’s marriage. Perhaps Sonija gave Michael the wrong impression, as I do believe she was single when the rumors broke out. Perhaps she had expressed her loneliness and pining for a good man, thus Michael may have misinterpreted. We have to be careful in the impact our words give and the impression they deliver. But Sonija gives the impression that she doesn’t quite filter her thoughts carefully enough when she speaks, thus leading to misunderstandings.

Finally, Sonija’s heartfelt admission that she was looking for love, not sure what qualities she had in mind, and almost giving up the quest, will likely resonate with many people. Although Sonija is a beautiful woman, she had a yearning for love (and unable to find fulfilling love relationships for a long time). Anyhow, I felt the same yearning Sonija did at some point too and felt like giving up looking, but fortunately I didn’t. While I do not believe that love is predestined, I do think it takes conscious effort to put yourself in the right social situation and awareness of what qualities you are looking for in a partner.