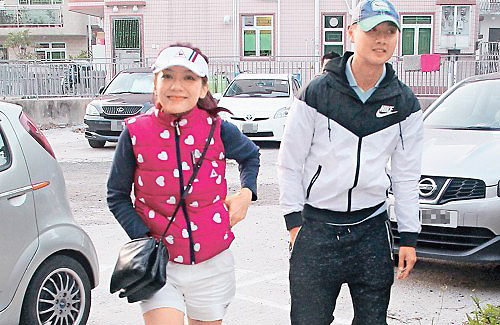 Negative rumors surrounding Stephanie Ho (何雁詩) and Fred Cheng’s (鄭俊弘) relationship continue to surface. In the short span of eight months that the couple have admitted to their relationship, they have had to fend off rumors regarding a third party, emotional instability, suicide attempts, and jealousy. Because of these worrisome reports, Stephanie’s parents are allegedly unhappy with the couple’s relationship and have not accepted Fred yet.

Stuck in the middle between her family and Fred, there may be some truth about Stephanie’s emotional issues. While attending her good friend Anjaylia Chan’s (陳嘉寳) wedding last month, Stephanie had one too many drinks and caused a scene. In addition to publicly criticizing her absent boyfriend, Stephanie also drunkenly exclaimed that she was currently single. This led to rumors that there may be trouble in their relationship. Whatever the issue may have been, however, the couple continues to live together.

Recently, Stephanie’s father was hospitalized. To improve Fred’s relationship with her parents, Stephanie arranged for Fred to visit her father in the hospital. The 25-year-old was spotted entering the hospital with her mother. About 20 minutes later, Fred arrived at the hospital holding a bouquet of flowers. Stephanie came out to meet up with him before escorting him to her father’s hospital room.

However, Stephanie’s father was not pleased with the visit and remained cold towards Fred. The 34-year-old was spotted leaving the hospital less than an hour later.

5 comments to Stephanie Ho in Rocky Relationship with Fred Cheng?