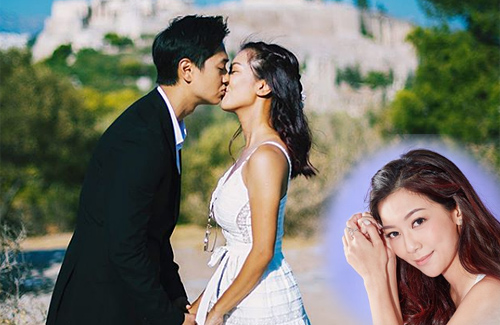 Engaged since January, Fred Cheng (鄭俊弘) and Stephanie Ho‘s (何雁詩) may be disrupted by the COVID-19 pandemic. The couple originally had plans for a September wedding in California, but they’re not sure whether the coronavirus situation will clear up in the United States by then.

“I think wedding planning is very complicated. Besides worrying about the effects the virus will have, we realized how many friends our family members have. Although we only estimated the party to be around 200 guests, my parents alone have 200 friends. We’ll have to figure this out later. We want a simple western-style wedding; it’s more relaxed this way.”

The official wedding ceremony will take place in California in September, but Stephanie said things are still up in the air due to the virus outbreak in the United States. After the ceremony, the couple will host their big wedding banquet in Hong Kong in November.

Stephanie is busy recording and getting ready to promote her new song, “To the People with Dreams” <致有夢想的人>.

Also recording and releasing a new album for his 28th birthday, singer Michael Lai (黎曉陽) reveals that this album contains two years’ worth of memories, and the album tries to depict life’s happiest and simplest moments. With songs being streamed and everything being digitalized, Michael admits that there were many risks and challenges with releasing a physical music album. Despite this – the singer said this is something too meaningful to give up and insists on pursuing this option.

Unfortunately, Michael expressed that he had no choice to but cancel the press conference for his album release due to COVID-19.

As to how he will celebrate his birthday, the singer is keeping it simple and will go watch a sunset by the sea with his mother and grandmother.

Fred Cheng and Stephanie Ho to Wed in 2020