Stephy Tang and Grace Chan: “It feels like fate!” 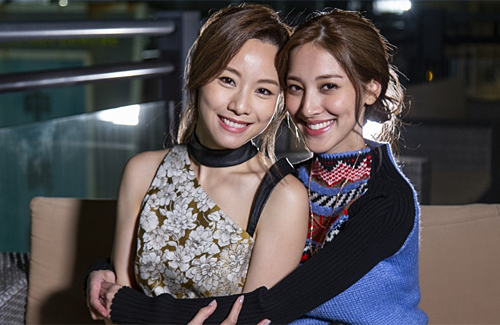 Despite never having worked together before, Stephy Tang (鄧麗欣) and Grace Chan (陳凱琳) got along like a house on fire on the set of Hong Kong film Keyboard Warriors <起底組>, with Stephy describing in a recent interview that it “feels like fate”.

Keyboard Warriors is based on the real-life accident involving an armored vehicle on Christmas Eve of 2014. The vehicle had crashed and spilled the cash it was transporting all over the street, causing many bystanders to rush out to pocket the cash rather than reporting it to the authorities. When asked about their memories of the incident, the actresses’ responses are quite different – while Grace frankly states that she understands the “free for all” mentality of the people picking up the money for themselves, Stephy sees the incident as almost like a bit of a fantasy.

In the film, the actresses portray two sisters – while 35-year-old Stephy plays the more responsible older sister and a police officer, 27-year-old Grace is the willful younger sibling. For the both of them, it was a challenge to play characters that were vastly different to their own respective real-life personalities. While Stephy’s role requires her to portray a constantly irritable and foul mood, Grace’s character is very willful, materialistic and infatuated with designer brands and share trading. In reality, Stephy prefers a good laugh to an argument, and Grace is rather caring of her family, and does not like to cause any trouble.

The sisterly relationship is a focal point of the film, and one that involved many emotional outbursts between the two actresses. In a preview video, there is a scene with Grace swearing, which has attracted much media attention. Grace is ever the professional in her response: “The audience will understand that this was a requirement of the role.”

Grace has also expressed a desire to work with Stephy again, and hopes it will be on another version of My Fair Princess <還珠格格>. We can only wait and see!