Racking up debt, former Boy’z member Steven Cheung (張致恒) had previously asked for his friends’ forgiveness and a chance to prove himself. Accused of cheating and financially strapped since getting married three years ago, Steven’s marriage with former model Au Yin Man (區燕雯) finally collapsed. Today, Man Man announced that the couple has divorced.

Last year, Steven’s residence in Yuen Long was plastered with messages from debt-chasing collectors and his letterboxes stuffed with similar notices. The former Boy’z member is said to have terminated his phone number and furtively moved out of his residence to avoid being found. Steven had denied the allegations, saying he was unable to repay the debts due to joblessness, and apologized to the debt collectors, promising to return the money when he can.

His good friends, singer Bob Cheung (張彥博), Bob Lam (林盛斌), and a few others all admitted to having lent Steven money at some point.  Model Naomi Fung (馮鎵瀠) had revealed publicly that Steven had borrowed money from her with no intention of returning it.

Despite his growing debt, Steven, his wife Man Man and their two boys were seen moving into a bigger home, and taking the taxi out to go shopping and apparently living a comfortable lifestyle. 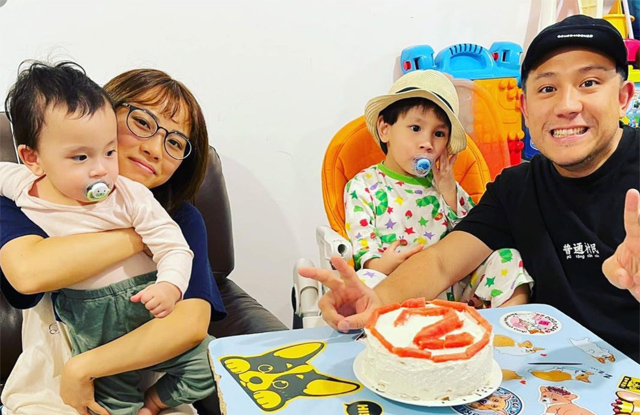 Gossip followed Steven everywhere since he married his fan, Man Man, after she became pregnant in 2019. April Leung (梁皓恩) accused Steven of cheating with Man Man during their relationship, and said she was shocked when he announced he already had a son. Multiple women also exposed him as a serial cheater.

Since the cheating scandal, Steven lost many jobs in the entertainment industry. EEG even cancelled Boy’z Hong Kong Coliseum concert. Steven was forced to take odd jobs such as working at a hotel buffet table to support his growing family. In 2021, Steven joined boxing program We Are Champs <培生擂台> and seemed to have turned around his finances.

Throughout Steven’s marriage, netizens often harassed him and Man Man on social media due to their cheating past. Threats from Steven’s ex-girlfriends and strangers mounted on Man Man, with some even threatening to harm her son. She felt very distressed multiple times and complained on her social media about the harassment, writing, “Can you please let us live in peace?”

When Man Man became pregnant with her second son in 2020, she asked the public for mercy and forgiveness. “Everyone in the world makes mistakes. After they make a mistake, if you don’t give them a chance to change, they will be stuck at this point for all their lives,” she pleaded.

The stress of being married to Steven seemed to have grown only with time. Today, Man Man announced on Instagram that their three-year marriage is over.

“Separating doesn’t mean it’s over. It’s just a way to make sure everyone can live better. Today, we’re officially divorced. I truly wish that you can find happiness,” Man Man wrote.

The press reached out to Steven, but he has not yet returned any calls.

This article is written by JoyceK and Jayne for JayneStars.com.