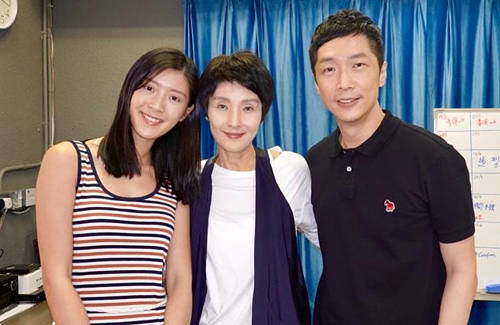 Announcing that all the prep work has been completed for his directorial debut, Till We Meet Again <生前約死後> (tentative title), Steven Ma‘s (馬浚偉) new movie will officially start filming May 6, with an expected premiere date in November.

The film is written and directed by Steven, who will also have a starring role. Life After Death is adapted from Steven’s stage play, which received critical and commercial success after its 11-session run in January. Spending five years working on the details for this film, Steven is thrilled that all his hard work is coming into fruition. He hopes to be able to submit it to international film festivals when the movie is completed.

Till We Meet Again follows a man’s guilt and depression after his mother’s death. The story dwells into the love between a parent and child, and how the deceased’s surviving family deals with loss. Steven wrote the story as a tribute to his late mother, who passed away due to cancer in 1999. Unable to cope with her death at the time, Steven had even contemplated suicide. Incorporating all these intense emotions into Till We Meet Again, Steven’s story hopes to encourage others to cherish their loved ones.

After her stellar performance in the stage play, Josephine Koo (顧美華) will once again play Steven’s mother in the film version. On working with Steven again, Josephine expressed, “Plays and movies are different mediums. After the stage play experience, filming the movie brings back familiarity. To me, the film version will be more relaxing to work on.”

Actress Jennifer Yu (余香凝), who was handpicked by Steven himself, is thrilled to be working with the actor for the first time. Although Jennifer didn’t know Steven personally prior to being cast, she found the actor to be very enthusiastic and professional.

Juggling between roles of directing and acting for Till We Meet Again, Steven admitted that there is pressure to do well. He said, “I would be lying if I said there wasn’t pressure. But the pressure is very positive – creating original content has always been a dream job of mine. I actually have a lot of screenplays on hand that I’m also working on. I hope everyone can support me and help promote Hong Kong productions to the world.”