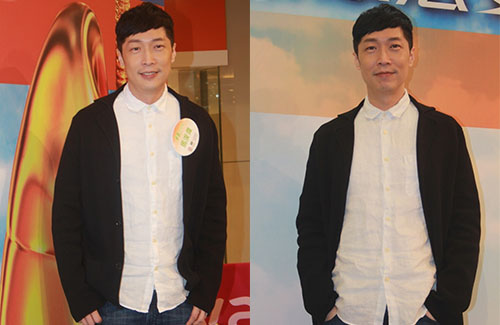 Steven Ma (馬浚偉) attended an event in Tsuen Wan yesterday to promote lung health. The Deep in the Realm of Conscience <宮心計2·深宮計> actor, who suffers from asthma, said he had his worst asthma attack when he was filming Ghost Writer <蒲松齡> back in 2009. “It happened almost everyday. The weather was unstable. That’s why it’s important to carry medicine with you at all times. I also had a portable air purifier with me, and it really helped!”

The 46-year-old added that consistent exercise and consistent rest has helped him control his asthma. Asking if his pulmonary disease had got him to consider dropping acting, the actor said, “No at all! Just make sure to save some time to rest, and watch your diet. I’ve also stopped drinking cold liquids!”

Steven shared that his next big project will be a rerun of his stage play Fortuitousness: Xu Zhimo <偶然·徐志摩>. Last December, Steven announced that his Deep costar Nancy Wu (胡定欣) has been chosen to play the female lead. The role requires Nancy to learn how to perform the Chinese opera Kunqu and the waltz. Steven is aware that Nancy has a background in Chinese dance, and teased the reporters that she would be making a sexy appearance on stage. David Chiang (姜大衛) and Alice Fung (馮素波) will also be starring in the play.

The actor is also interested in becoming a coffee barista, and have just learned how to master latte art. He added that he is looking forward to learning more about coffee beans. As for his wish to continue his education, Steven revealed that he just had an interview with Peking University.

“I’m interested in their EMBA (Executive Master’s of Business Administration) program. (The same program Nicky Wu 吳奇隆 was in?) Yes! Actually he was the one who recommended it to me. I’ve already done the interview. I’ll know if I get accepted in a week!”