Tavia Yeung and Him Law Enjoy Romance at Work 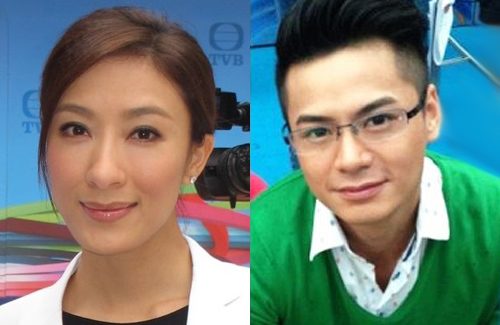 Real-life lovers, Tavia Yeung (楊怡) and Him Law (羅仲謙) are enjoying time together on the set of The Hippocratic Crush 2 <On Call 36 小時II>. Although Him was romantically rumored with costar Eliza Sam (岑麗香), Tavia has dismissed such rumors and has faith in Him.

The cast of The Hippocratic Crush 2 ,which includes Tavia, Him, Lawrence Ng (吳啟華), and Tracy Chu (朱千雪), are wrapping up filming for the drama and was spotted outside the South China Athletic Association earlier. Although Kenneth Ma (馬國明) was noticeably missing from outdoor filming, the star-studded entourage attracted the attention of many pedestrians.

The romantic pairing in the series include: Tavia and Kenneth; Lawrence and Tracy; and Him and Eliza. Although 48-year-old Lawrence is twice as old as Tracy, the visible difference is hardly evident and the couple is a convincing match.

The Hippocratic Crush ended with good friends, Him and Candy Chang (張慧雯) becoming lovers. However, due to Candy’s drug incident late last year, Eliza replaced Candy as Him’s love interest. During the location filming, Eliza absentmindedly lifted up her shirt to reveal her navel button while searching for her misplaced microphone.

Although Him and Eliza shared romantic scenes, Tavia did not show any signs of jealousy. Perhaps intimate moments with Him during filming breaks were sufficient to make Tavia content. However, both Him and Tavia maintained their distance and avoided talking about their relationship before the press.

Yet, Tavia became excited when she revealed that the cast saw Chow Yun Fat (周潤發) while filming on location earlier. Chow Yun Fat had once said that if he were to return to TVB, he would love to work with several fadans, including Tavia. Working with Chow would be a challenge in which Tavia will put in 101% effort.

Him also denied that he purposely distanced himself because of the presence of the reporters. He said, “I did not do anything against my conscience so there is no need to avoid.” When asked if their relationship has progressed further due to their frequent contact because of work, Him smiled and said, “Carpe diem!”