Tavia Yeung and Him Law Spotted on Date in Taiwan 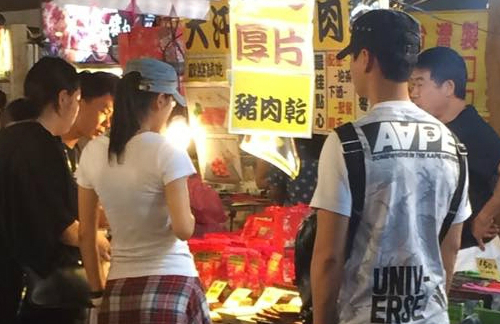 Although Tavia Yeung (楊怡) and Him Law (羅仲謙) never publically admitted to their relationship, the fact that they are dating is already an open secret. Since Him is currently working in Taiwan, Tavia took the opportunity of the Mid-Autumn Festival to fly over and celebrate the holiday with her love. Last night at around 10:45p.m., the couple was spotted on a date in Taipei’s Raohe Street Night Market.

Tavia and Him were photographed shopping at the night market with two other women. At the time, Tavia was busy purchasing pork jerky at a stall while Him guarded her from a short distance. The couple was relatively easy to recognize, as they did not wear facemasks or sunglasses. Tavia had light makeup on, wore a denim cap, and put her hair in a ponytail. Both of them donned white t-shirts.

In a previous interview with Him, he had shared that he would spend the year working hard to earn enough money for a flat, and then would marry as soon as the timing is right. When reporters had asked if he already proposed to Tavia and set her as his marriage partner, Him had smiled and replied, “Just write down that I gave a knowing smile.”