Tavia Yeung is Not Jealous of Sisley Choi 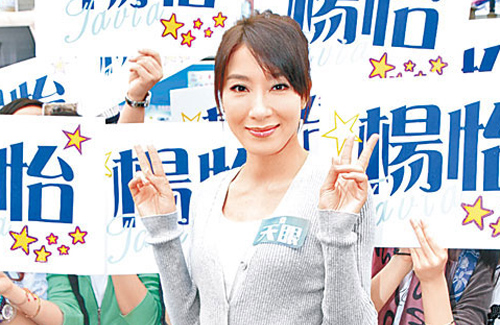 “Just treat it as promotion for both the series. His drama is pretty good too. I enjoyed watching the female and male characters.” Tavia said.

When asked whether she was jealous of Sisley’s romantic scenes with Him, Tavia said, “Being jealous is actually pretty good for the health. I don’t mind being jealous. I’m quite an open-minded person. Even though I am not familiar with Sisley, but I think she is a hardworking girl. Hopefully she won’t be affected by the news reports.”

At the promotion, Kevin spoke about his new series The Vampire <殭>. When asked about Grace Chan’s (陳凱琳) sexy scene where she bared her naked back in the series, Kevin laughed and said he was not as lucky as Joel Chan (陳山聰), who stars as a vampire in the drama. He jokingly responded, “I only kill vampires and don’t get to bite people, so I don’t have the fortune of film alluring scenes. Maybe it’ll be my turn next time!”

Kay Tse‘s (謝安琪) sexy scene reportedly attracted many artistes to visit the set to watch the filming process. Laughingly, Kevin said, “It can be considered one of the most daring scenes in television history. It was necessary for the storyline.” When teased about his fit physique, Kevin humbly responded, “Don’t say that. The lighting was just good!”

Earlier, TVB announced plans to film a sequel to Brother’s Keeper <巨輪>, which will star Kristal Tin (田蕊妮), Edwin Siu (蕭正楠), and Grace Chan (陳凱琳). Ruco confirmed that he will be guest starring in the sequel as well.

39 comments to Tavia Yeung is Not Jealous of Sisley Choi