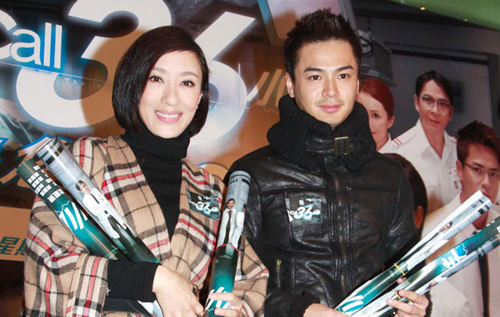 Rumored couple, Tavia Yeung (楊怡) and Him Law (羅仲謙), promoted their TVB drama, The Hippocratic Crush <On Call 36小時>yesterday. In a recent broadcast episode, Him Law was featured in figure hugging swimming trunks. Him laughed, “I think it looks pretty good!” (Did Tavia praise you?) “Yes, but she did not touch!” Tavia highly praised Him, “He looks great! I secretly touched him from behind!”

Recently Kenneth Ma (馬國明) admitted dating Nancy Wu (胡定欣) in the past, which incurred Nancy’s  dissatisfaction that he was using the incident for publicity. Kenneth explained, “She was likely smiling when she said that!” (Prior to revealing your past relationship, did you consult with Nancy?) “Yes, the press accused her of being greedy for money. I just wanted to clarify on her behalf. In addition, we are good friends now.”

Asked what was the reason for the breakup, Kenneth replied, “I have already responded on this question earlier and will not talk about it anymore!” Jayne: Every series that Him stars in, he must strip otherwise there will be fan protests!