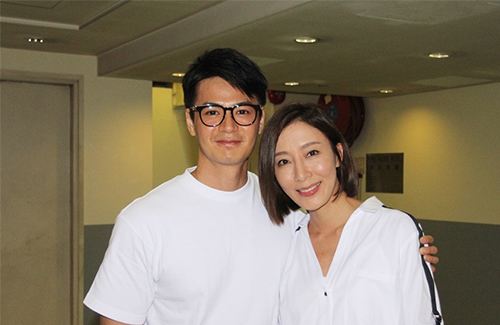 The Internet’s favorite couple Tavia Yeung (楊怡) and Him Law (羅仲謙) celebrated their birthdays together with the company of family and friends. Tavia, who turned 40 on August 30th, wore high rise jeans and was jumping around all night, a move that seems to indicate that the actress is not pregnant—at least not yet.

At Tavia and Him’s joint birthday celebration in Tsim Sha Tsui, the couple explained that the birthday party was their first friends gathering in a while—Him has been busy filming, and hasn’t had the time to see his friends nor his wife. The couple have no plans for more birthday celebrations, and also do not have the habit of giving each other gifts.

Reporters asked Tavia if the pregnancy rumors are true, she laughed and said, “No! I’ll also be working in September.” Tavia even posed for the reporters, to show that she has no belly bump. Asking if Tavia is dismissing the news because she’s currently in her first trimester, she said, “From my marriage til now I’ve been having people congratulating me. The rumors haven’t stopped! Fine—we’ll work hard! But it’s already September!”

There’s been talk that Tavia has been turning down meetings and job offers, including the opportunity to star in Forensic Heroes IV <法證先鋒IV>. She explained, “I’ve been flying around. I just came back from Saipan and Wenzhou for work, and I have other jobs lined up. I was also never offered to do Forensic Heroes, but I’ll invite myself for the fifth one!”

Tavia shared that she has been seeing a traditional Chinese doctor, and has been taking relevant pills, but clarified that her decision to do so isn’t because she wanted to have kids sooner, but for her health. Pregnancy should come naturally, but she did say that her birthday wish this year was to get pregnant soon.