Tavia Yeung Will Prepare for a Baby Next Year 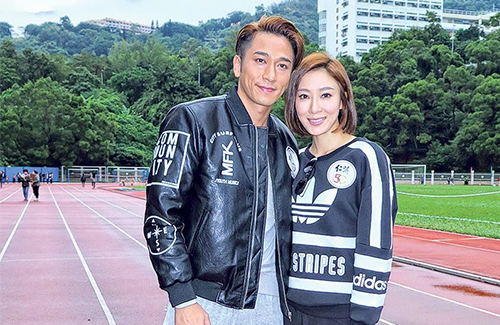 Tavia Yeung (楊怡) was not in her best shape when she appeared at a charity marathon event with Ron Ng (吳卓羲) yesterday. With a raspy voice, the former TVB actress told the press that she has been sick with a cold for the past two weeks. When reporters joked that her husband Him Law (羅仲謙) would not be able to kiss her, Tavia joked along and said, “He can kiss me through tissue paper.”

Though Him has just returned to Hong Kong from work, Tavia shared that he will be traveling again around Christmas time, to shoot The Monkey King 3 <西遊記>. Tavia herself will also be traveling, as she needs to prepare for her play I Have a Date with Spring <我和春天有個約會> in Mainland China.

“We won’t be seeing each other much this year,” said Tavia. “When I see him again, it’ll probably be after New Year’s.” (So no ‘baby-making’ plans this year?) “Of course! It’s already the end of the year!” (But you still need to put it into practice!) “My body and health need to be in good shape first. I’ve been sick and taking a lot of medication. Let’s wait until after we’re done with all our jobs, and when we are in better shape.”

Ron, who took an early flight back from Hangzhou to attend the event, said he’s been busier than ever. “It’s not easy money. I’ve been flying all over the place. I know the market is not as good as before so I have to work even harder. I want to reach my new breakthrough.”

On his experiences so far after leaving TVB, Ron said, “I’ve received a lot of film offers. I’m thankful of TVB for giving so many opportunities to their rookies.”