The Changes in Ron Ng 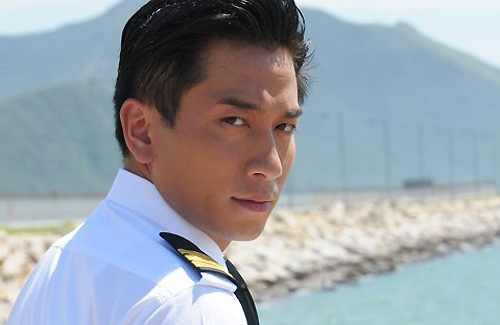 With his stern looks and perpetually furrowed brows, Ron Ng (吳卓羲) is often teased by the media for looking “black-faced.” Twelve years after his debut, Ron has noticeably become more talkative, livelier, and his black face has brightened up.

Ron said, “Back then people said I always had on a ‘black face’ (looking glum). There were also those who said I gave them attitude because when they asked me questions, I only gave brief responses. The truth is – I didn’t know how to face the press. My brain could not react fast enough to respond appropriately. My manager wasn’t very happy with me, so I knew I had to find ways to change myself.

“Now, I will think ahead on what topics I can talk about before I meet with the reporters or attend events. As long as they still have questions to ask, I will have answers to tell. We are all just doing our jobs!

“It takes time to change. Now I am quite close to a few reporters and we would sometimes eat out together like old friends!”

Ron never saw himself as an actor. With a love for dancing and performing, Ron’s entry into TVB was through the station’s dance class in 1999. A year later, he was recommended by several seniors to audition for TVB’s artist training class, and later graduated from the class in December 2000. Ron made his debut acting performance in a minor speaking role in the 2001 sitcom, Virtues of Harmony <皆大歡喜>.

Ron’s first two years as an actor were quite stressful. He had his first major leading role in 2003 period drama, Find the Light <英雄·刀·少年>, but he was berated for his wooden acting. Though Ron shot to fame after starring in Triumph in the Skies <衝上雲宵>, the heavy criticism on his acting did not change.

However, there will always be room for improvement when it comes to newcomers. Critics could always dismiss the incompetent acting from rookie actors as inexperience, but what about Ron as an experienced actor now? With twelve years of acting training on his shoulders, critiques on his performances became harsher.

Surprisingly, Ron does not feel stressed about this. In fact, he feels no pressure at all.

“When I knew that Triumph in the Skies 2 was going in production and Francis called me and said we’re finally going to film it, I thought I would feel the pressure. From the day of the reading and to the first day of filming, I did not feel any pressure. Maybe it’s because Triumph in the Skies 2 had been in the making for the past 10 years. When production didn’t fall through, I did feel a little numb. When the project was green-lit, the memories I had from 10 years kept going through my head. I didn’t need to watch the first installment again because every single picture and plotline from the first installment were all in my head. Not just this one. I still remember many filming details from the other dramas I’ve done.

“But honestly, it’s not even my right to feel the pressure. Francis and Chilam have it!”

When Ron was still shooting the first Triumph in the Skies sequel, he considered his costar, Francis Ng (吳鎮宇), a senior and a mentor. Ten years later, Ron has gone from being a rookie star to an experienced senior actor in the industry. Ron is no longer a junior. Francis has now changed from being Ron’s respected senior to a good friend.

“Francis and I became friends. Whenever he has free time or whenever he is in Hong Kong, we will meet up for lunch or dinner. When we were filming the sequel together, we ate out together once a week. We’ve become great friends.

“I was quite nervous when I first worked with Francis ten years ago. Honestly, he didn’t care much about us newcomers back then, but filming with him again ten years later had a completely different feeling to it. Before we did a scene together, he would ask for my opinion on the script and asked how I would play it out. I would tell him my thoughts, and he would say, ‘OK! Go for it!’ He would discuss it thoroughly with me, as if he’s trying to see what I have improved on in the past ten years.

“[Francis] is a really professional actor with extremely high tolerance. I remember there was one scene [in Triumph 2] about me failing an exam and I was feeling unhappy. I was in my room alone, thinking. After reading the script, Francis told me that I was the main character in this scene. He didn’t give me much input and told me to boldly do whatever I want. He became a minor supporting character. This is the tolerance and understanding he has. Just because he is the drama’s main character doesn’t mean that he has to appear in every scene of the show. A lot of artists don’t have that understanding.”

Ron’s life as a TVB idol was not all sunshine and rainbows. Aside from his long laundry list of rumored girlfriends, he also had a few rumored discords with his male costars as well. Louis Koo (古天樂), who recommended him to join TVB’s acting class years ago, was also rumored to have had money issues with Ron.

Ron’s image did suffer a big blow from the negative press, and in 2007, TVB “released” Ron to mainland China to film Chinese television dramas. Thinking back, how does Ron feel about all of this?

“I can’t say I wasn’t worried about my own news back in the day. I would become unhappy when I get negative press, but now, I stopped worrying about it. I don’t even remember when I stopped caring. I think it’s because I have more experience now. I’m older, more mature, and I think and behave differently. Now, regardless of what news I read about myself, I would not care too much about it. I read it; I laugh it off. I’m an artist, and my job is to entertain the audience. As long as everyone is happy, it doesn’t matter to me.”

Ron had many rumored girlfriends in the past, but out of that large basket, his past relationships with Revolving Doors of Vengeance <酒店風雲> costar, Ella Koon (官恩娜), and mainland Chinese actress, Viann Zhang (張馨予), were the most widely-reported. These relationships did not end well at all.

“As for these two relationships, I will only describe them like I would a rumor. I don’t want them to affect my opportunities in finding a girlfriend in the future. As for whether I want my girlfriend to be in the industry or not, it doesn’t matter to me. Why should I restrict myself? Honestly, right now, I really don’t need to date anyone. Though my mother always asks why I’m not dating yet, why I still don’t have a grandson for her… I know. I am my family’s own son. I have the responsibility to pass down the family name. But I really don’t have time! Think about it. The simplest requirement in dating is that the couple must see each other, but I can’t even do that. So why date? Or maybe I just haven’t met the One yet.

“I have strong family values. I will definitely marry. As for kids, I’ll rather play with my friend’s kids or my sister’s kids. Honestly, I’m not that fated with children. Take my niece for example. When she was younger, she would always cry when she saw me. I don’t know. Maybe I will have kids, but at this moment, I am really not ready for that!”

Ron used to have one expensive hobby – collecting cars – but even that is changing now. He currently owns three cars. In the past, he would be excited to return home after a long day of work and then drive around the city with his lavish sports cars. Now, Ron would rather get a good night’s rest and prepare for work the next day.

“A friend of mines asked me if I was interested in purchasing an used Lamborghini. The key feature of the car is that it has those ‘scissor’ doors that go up instead of out. The price was not expensive. If it was the old me, I would have taken a look at it immediately. It was a dream car after all, but now, I’m really not that interested anymore. First, I don’t have time to drive it around, and two, I don’t have the energy to drive either. Now I just use my cars to drive myself home after work. There’s no use of getting a dream car when I won’t make use of it!”

73 comments to The Changes in Ron Ng