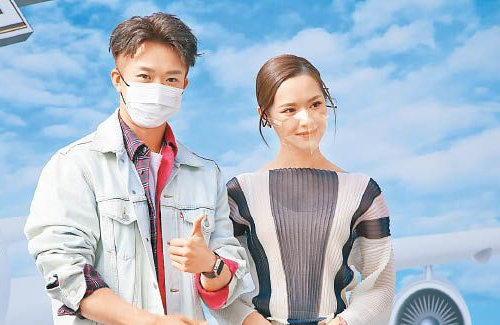 There’s been a lot of gossip surrounding the rumored relationship between Crystal Fung (馮盈盈) and her Young and Restless <#後生仔傾吓偈> co-presenter Leonard Cheng (鄭衍峰).

According to a new report, Crystal and Leonard had in fact secretly dated following Crystal’s breakup with her non-celebrity boyfriend Martin. Their dating life wasn’t the most well-kept secret, as paparazzi were able to spot Leonard driving Crystal’s car, as well as holding the pass to enter Crystal’s apartment building. They also frequently dressed in similar attire, which usually indicates a pairing to be a romantic couple.

But in their most recent appearance to promote the TVB show See Me Fly Again <衝上雲霄大選>, Crystal and Leonard barely acknowledged each other and tried to avoid each other hair until reporters requested them to take photos together. They were not happy. A source said Crystal had attempted to avoid Leonard, and specifically told her PR team to not do interviews with him.

Why the distance? According to rumors, the couple broke up over disagreements about going public. Leonard wanted to date Crystal publicly, while Crystal preferred to stay in the down-low, perhaps learning her lesson after a very public relationship with Martin. Leonard also allegedly disliked Crystal’s mingling with the social elite, such as getting cozy with Arnaldo Ho (何猷亨).

Crystal and Leonard used to frequently engage each other on Instagram, but even that’s becoming less. Leonard has been giving Crystal less likes on her posts, and Crystal has stopped liking Leonard’s posts since November. Leonard has also been sharing cryptic messages, which seems to imply a broken relationship.

Source said they would spot Crystal and Leonard arguing while working, and that Crystal’s manager, TVB executive Virginia Lok (樂易玲), has also given them “a scolding” about their relationship problems getting too public.

Crystal and Leonard have denied these rumors of course. When asked if she had broken up with Leonard, Crystal lightheartedly said, “Break up? We have always been just colleagues and friends.” Pointing out that someone spotted them arguing at work, Crystal explained, “In a normal setting people would not bring their personal problems to work. We were probably rehearsing for Young and Restless. (Leonard’s liking less of your posts). I haven’t been taking notice. I guess I’ll ask him why next time.”

Leonard had very similar responses. “We still have a great relationship,” he told reporters. “Thank you for your concerns. Remember to vote for her!”