Tiffany Chen Fires Away, “Cecilia Cheung Lies All the Time Due to Her Poor Education” 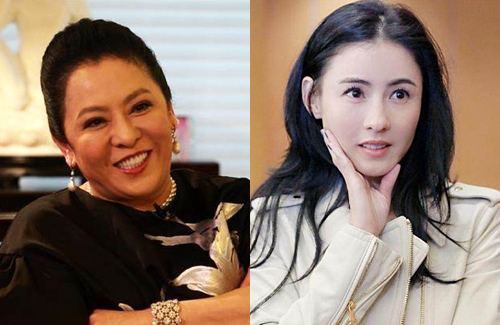 After Cecilia Cheung‘s (張栢芝) inconsistent replies on variety show, Day Day Up <天天向上>, the actress gave the impression that she is a compulsive liar. Cecilia’s former manager, Tiffany Chen (陳嵐), the wife of China Star Entertainment founder Charles Heung (向華強), piggybacked on the opportunity to attack the actress, claiming Cecilia has a habit of lying due to her “poor education” and “twisted mind”.

On Day Day Up, Cecilia shared that she loves to cook and would prepare various dishes for her two sons, Lucas and Quintus every single day. When host Wowkie Zhang (大張偉) asked what were the boys’ favorite dishes, Cecilia she stuttered. Her inability to answer such a simple question considering she claims she cooks for them every day made netizens very skeptical of her responses. As well, her claim that she “has never eaten meat before” was proven to be another lie when a netizen found a picture of her eating meat on a variety show a few years earlier.

Tiffany Calls Cecilia Out for Her Lying

Though once regarding Cecilia as her own daughter, Tiffany has taken every opportunity to comment on the actress’ negative news since their fallout. Previously, she criticized Cecilia for not knowing the father of her third son, but netizens believe her insults have gone way too far in attacking a single mom.

In a post made on June 1, Tiffany blamed Cecilia’s lying on her lack of education and intelligence. She claims that Cecilia lies to cover up the lows of her life including growing up in a single household and divorce. She ended the post with a diagnosis that Cecilia’s mental health was unstable and should seek help immediately.

Tiffany received a lot of backlash for her insults, which she eventually deleted from her social media account and claimed that she was just testing out a post on her new cell phone. She said the post did not name any names, and if she wanted to scold Cecilia directly she would be even more relentless.

Cecilia’s management decided to post her childhood photos to lighten up the tension. The actress later simply replied, “Gossip is a fearful thing”.

6 comments to Tiffany Chen Fires Away, “Cecilia Cheung Lies All the Time Due to Her Poor Education”