Turning 24 years old on May 24, Tiffany Lau (劉穎鏇) celebrated a year of new milestones. Landing a leading role in TVB youth drama Shameless Youth <青春不要臉>, Tiffany has been balancing her filming projects while completing her education. Earlier, she received her Bachelor’s degree in Business at Arizona State University.

Growing in Los Angeles, California, Tiffany competed in Miss Hong Kong 2016 at the tender age of 19. Placing first runner-up, she also won Miss Photogenic and The Most Popular Contestant awards. Tiffany’s career has been on a steady rise, and she has hosted scientific educational variety show Sidewalk Scientist <學是學非>. In 2018, she took on her first lead role in Fist Fight <兄弟> and won praise for her convincing action scenes. She currently has many dramas awaiting broadcast, including Chinatown <唐人街>, and I’ve Got the Power <超能使者>. 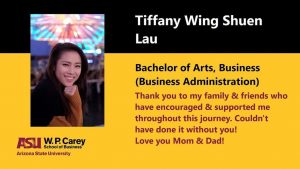 After joining the entertainment industry, Tiffany put her university studies on hold. In 2018, she decided to return to school part-time and completed her studies online through a joint program with the University of California and University of Arizona.

Tiffany declared happily, “Over the past two years, it has been very difficult to balance school and my studies. There was a lot of pressure, but I’m very happy to be done. I’ve finally graduated!”

Time management was difficult, and Tiffany needed to take her laptop with her everywhere. There were many sleepless nights due to essays and exam preparation, but she wants to encourage others in a similar situation as herself. “We are stronger than we think. Even though there were moments where I lost motivation, I was still able to power through.” She thanks her family for their support and encouraging her to chase her dreams.