Too Much Like a Soap Opera: Kitty Zhang and Ex-Husband Have Split Again 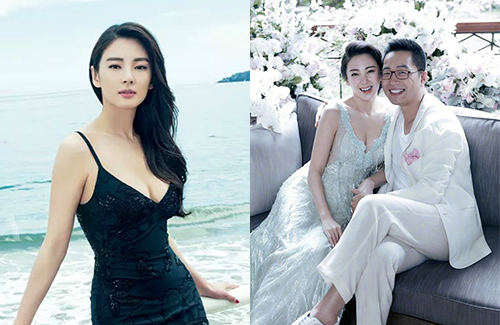 In 2016, Kitty Zhang Yuqi (张雨绮) married Shanghai banker Yuan Bayuan (袁巴元) after only dating for 70 days. The couple welcomed a pair of twins in October 2017, but the fairytale life didn’t last—within a year after the twins’ birth, Kitty and Yuan announced their divorce, and it wasn’t an amicable split. The divorce was finalized only after it was revealed that Kitty and Yuan had a nasty physical dispute, in which Kitty knifed Yuan in the back.

However, no less than two months after their divorce, the ex-couple were spotted back together. A series of paparazzi photos were shared in November 2018, showing the couple walking together in the streets of Shanghai. The couple were spotted together a few more times after that, causing the public to speculate that their divorce was due to financial reasons, as Yuan had racked up millions of debt. The rumor said Yuan did not want to get Kitty and the twins involved with his financial troubles.

But just as their future started to look bright again, Kitty and Yuan dimmed it all back down, this time dragging each other’s dirt. In a surprise announcement, Yuan admitted that he and Kitty did get back together after the divorce, but it was her infidelity that drove him to break up with her again.

He said, “Last night I saw her with the man she met a few nights ago again. They were in a hotel in Shanghai. That has always been her style. She was like that before the divorce too. All she cared about was herself. She didn’t care about how others felt, especially not the kids.” He stressed that divorce has now become their final ending, adding, “Miss Yuqi can now have fun in the open,” and called Kitty a “woman with body odor.”

Kitty wasn’t going to let that slide. In a statement released on social media, Kitty said she originally wanted to stay quiet about her private life as she did not want to burden the public with her marital and relationship problems, but Yuan’s claim had brought shame and embarrassment to her.

She stated three points. Firstly, she expressed her disgust at how Yuan was so willing to air their dirty laundry to the public, expressing that something as intimate as relationships should be kept private. Secondly, since she is now single, she has every right to meet whomever she wanted, but “to claim that [she] slept with [the man] on the second day of meeting is absolute nonsense.” Thirdly, she believed that Yuan wanted to use his extreme allegations to ruin her career.

Kitty then claimed that her ex-husband wanted her to give up custody of their children. “While I am an independent woman, I am also a soft-hearted mother. I cannot guarantee that I’ll have a clear head all the time, and I have a temper, but I will turn soft for my children. I’m sorry that my children will have to grow up knowing that their parents turned out like this. I am deeply ashamed for not being able to protect my children, and if my collaborators wanted to let me go, then I have nothing to say. But, your lady does not have body odor! I’ve loved, yes. I’ve hated, also true. Mr. Yuan, please return my $10 million. Let’s not meet again.”

Yuan then fought back, claiming that he was wiling to pay 50 million yuan of alimony to Kitty when they signed their divorce papers. He then asked, “Is it good, then, for the kids to become just like you, switching boyfriends whenever you want to? That is what makes me loathe [you]. Since this is about [our] relationship [problems], it is thus appropriate to mention you and that man. How come you didn’t explain how you continued to see other people after our marriage?”

Yuan then released their text message exchanges between October 2018 to December 2018, in which Yuan had confronted Kitty about the infidelity. Kitty replied by saying that Yuan was “the only one” for her, but Yuan kept a clear mind, and said none of Kitty’s relationships had lasted. “If I don’t take you stinky woman down now, you’re going to go off to ruin others!”

4 comments to Too Much Like a Soap Opera: Kitty Zhang and Ex-Husband Have Split Again