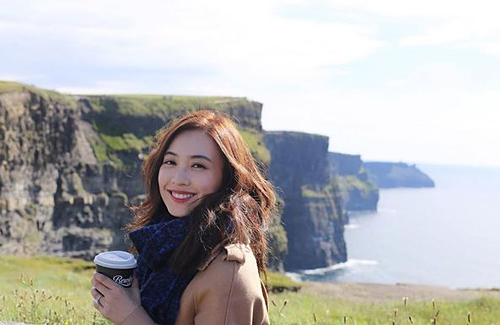 2012 Miss Hong Kong 2nd runner up Tracy Chu (朱千雪) has always been beloved by the public. It can be said that she is one of the most popular TVB actresses in recent times. Recently there was a post by a netizen in which Tracy was mistaken as the winner of Miss Hong Kong, and many people replied in shock that they had the same impression as well!

When Tracy participated in the pageant, she was the hot favorite to win. 2012 was also the first year that voting was open to public. At the time she had already received many votes from artistes at the show, but the server went down due to the large amount of votes. In the end, it was decided to revert back to the old format of judging. Carat Cheung (張名雅) was crowned the winner and Jacqueline Wong (黃心穎), first-runner up, and Tracy as second runner-up. Even though she lost out on the crown, she won the hearts of the public. It seems that this has stuck in the minds of the public and everyone forgot that she did not actually win the top crown!

Despite this, Tracy was given many opportunities to join different dramas and won good reviews for her role in Legal Mavericks <踩過界>. However in 2017, she suddenly requested leave from TVB to return to school. She first decided to complete her Master’s degree in Corporate Communications. This did not satiate her lust for learning, and she recently returned to school to complete her J.D. in Law.

Even though it seems that she loves learning, Tracy shared that she actually did not like school as a child. When she immigrated with her family to Vancouver, she did not know a single word of English and was unable to make friends for two years. However, she always had an innate curiosity and took part in many different extracurricular activities ranging from Mandarin, drawing, skating, fencing, and swimming. All of these were not able to peak her interest, and Tracy wished that she could quickly become an adult and be able to leave the restrictions of school. As she matured, she learned to appreciate all the opportunities she was given as a child. Tracy soon mastered English, Mandarin, and French.

Tracy hasn’t been in the entertainment spotlight for a while, and a netizen recently found her name on the Hong Kong Bar Association website. Her name is listed as an intern under a practicing lawyer in Admiralty. This matches up with previous rumors that while she was studying, one of the big five law firms in Admiralty had already set aside a spot for her.

It seems that Tracy has the ideal life with a good balance between her career and love life. This year, Tracy married her boyfriend Justin Ng, whom she has known since childhood. He works as a doctor and seems like the perfect match for Tracy.