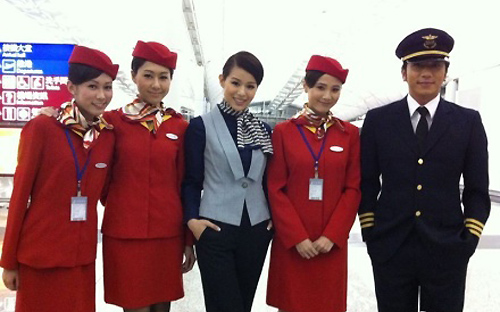 One of TVB’s most expensive filming projects this year, Triumph in the Skies 2 will film in Great Britain, France,  Taiwan, and Qingdao, China.  The 40 episode drama is produced by Joe Chan (陳維冠).

Triumph in the Skies 2 will feature several key returning characters from its first installment and chronicle the lives of pilots and staff in the airline industry. In the original Triumph in the Skies, Francis Ng and Myolie Wu’s characters had gotten married. However, Myolie’s “Zoe” dies from heart disease, making Francis’ “Sam” grief stricken.

Fala Chen will portray a pilot, involved in a love triangle with Francis Ng and Chilam Cheung’s characters. Since Fala’s character’s ex-boyfriend had died earlier, she understands the grief of losing a beloved one.  Chilam’s character will carry a reflection of Fala’s ex-boyfriend.

Myolie will portray two characters in Triumph in the Skies 2. Aside from Zoe, Myolie will also play a airplane technician who will have a romance with Ron Ng’s “Issaac.” At first, Ron will be resistant to loving a woman who bears the same resemblance of his deceased sister-in-law, Zoe.

Jayne: Perhaps “Triumph in the Skies 2” will retain the flavor of its first installment as a romantic travelogue, where its characters fulfill their romantic destinies in exotic international locations. It was not mentioned who Rebecca Zhu will be paired with, but presumably she will be in some love triangle with one of the male leads.

96 comments to “Triumph in the Skies 2” Character Relationships Exposed!