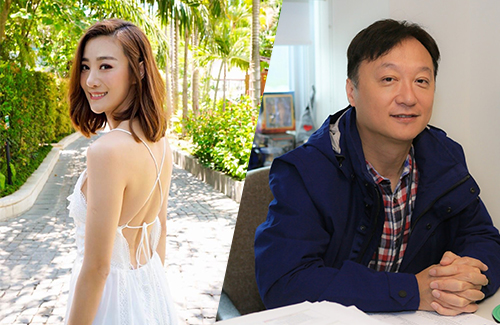 TVB rising star Ashley Chu (朱智賢) became a household name overnight following her cheating scandal with Zombie <食腦喪B> costar Jackson Lai (黎振燁), who is a married man. Both parties have come forth to apologize, and both are taking a break from work.

Ashley, supported by her current boyfriend Brian Tse (謝東閔), held a press conference to apologize to the public. She apologized a total of six times. In a later interview with TVB’s Scoop <東張西望>, the same program which Ashley became known, she told viewers that she had maintained a romantic relationship with Jackson because she couldn’t get out of character. Jackson gave the same reason in a separate interview.

Cheung was reached out for clarification. He denied the clip’s white washing, but did express his hope for Ashley to overcome the scandal so she can continue her hosting career at Scoop.

“After she lost Miss Hong Kong, I was the one who told her to come back,” said Cheung. “And she did really well, worked really hard, and many programs started to come asking her to host. She also had no trouble joining the drama department. She’s willing to do anything!”

Cheung added that Ashley is still a rookie actress, and her acting experience is thin. He believes her reason of not being able to get out of character, and even called her foolish. “We’ve been coworkers for many years. I know she’s foolish, and also quite stupid… I was there when she debuted, and I believe that she is not that kind of a person. Yes, she made a mistake, but I hope that doesn’t mean she won’t have any more opportunities.”

As for the clip’s so-called “white washing” of Ashley’s image, he said, “That clip was just a generic video documenting the hardships of actors. It wasn’t meant to be just about Ashley Chu. We just wanted viewers to understand the actors’ struggles behind the scenes.”