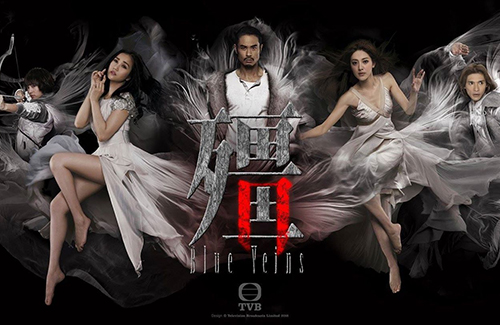 All-new character posters for the upcoming TVB fantasy drama Blue Veins <殭> have been revealed. The drama about modern vampires premieres in Hong Kong on April 11, 2016.

Blue Veins was first announced in late 2014, when it was reported that Kay has signed a filming contract with TVB. Though not unfamiliar with acting, Blue Veins is the singer’s first official television drama. Shooting for the series was challenging for Kay, who said she had to learn how to “growl” specifically for her vampire role. Interestingly, the growling training led Kay to increase her vocal range.

As a vampire, Kay had many action scenes on the show. She recalled numerous scenes where she had to do wire-work. Though she has no martial arts background, she said Blue Veins’ action choreographers were very helpful in making her a convincing fighter.

She shared that she had put on over eighty different outfits throughout the show, and with over ten different looks. Her favorite outfit was the qipao—in that particular scene, Kay wore a revealing outfit to lure a man into a dark alleyway, to distract him from assaulting another woman.

Aside from being Kay’s first television drama, Blue Veins is also notable for bringing Kevin and Grace together in real life. On the show, Grace portrays Kay’s younger sister, who has an unrequited lover for Kevin. Grace also resembles Kevin’s wife from 400 years ago.

“My character is very meek,” said Grace. “An unhappy experience when I was child led me to stop talking, so I often had to use my body language and facial expressions to express my feelings.”

Ying Wut-cheuk (Kevin Cheng), a 500-year-old “undead” superhuman, has made it his life’s mission to vanquish vampires. He travels all over the world to hunt them down, changing his identity every 20 years. In the Netherlands, he meets the forensic pathologist Lam Mung-nam (Kay Tse), who takes a strong attraction to him.

While pursuing the vampire Ling Fung (Joel Chan), Wut-cheuk travels back to Hong Kong, where he discovers an odd relationship between the vampire and Mung-nam. He settles in and starts a midnight diner to investigate. During this time, he meets Mung-nam’s younger sister Mung-yiu (Grace Chan), and her two college friends Ho Yuet (Anjaylia Chan) and Yau Ling-mui (Winki Lai), both with mysterious pasts. Mung-yiu catches Wut-cheuk’s attention, as she resembles his wife from 400 years ago.

Despite Mung-nam’s identity as a vampire, Wut-cheuk falls in love with her. Mung-nam also manages to put her life back together and recover from a strange sickness. However, Wut-cheuk’s rival, the undead Pong Ying-tin (Eddie Kwan), is determined to capture Mung-nam for himself.

Order is thrown into chaos when Ling Fung recruits a team of vampires to strike havoc around the city. Wut-cheuk and Mung-nam are entrenched in a century-old feud between the vampires and the undead, with no escape.