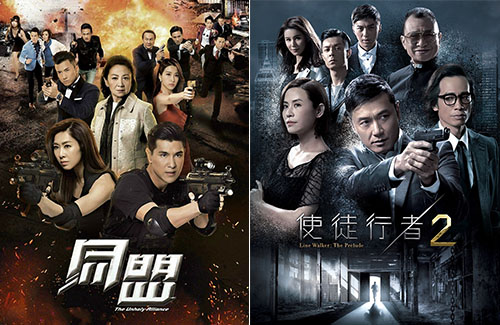 With 2017 almost coming to an end, it is time to start reflecting on the results of TVB’s 50th television season. If there was any lesson to be learned at all, 2017 has taught us that blockbuster productions do not necessarily mean it would win the hearts of the masses, and that lower-budget dramas should not be swept under the rug. The third most-watched television drama of the year is Tiger Mom Blues <親親我好媽>, which aired in the beginning of the year. Starring Ben Wong (黃智賢), Elena Kong (江美儀), Sharon Chan (陳敏之), and a special starring appearance by Michelle Yim (米雪), Tiger Mom Blues averaged 25 rating points when it aired in February. The show is also responsible for pushing Matthew Ho (何廣沛) to stardom—the rookie actor is now leading TVB’s next generation of siu sangs, and is co-starring a drama with Joe Ma (馬德鐘).  Tiger Mom Blues was not produced with a big budget, and it also went through a controversial production phase, but it won the audiences with its heartwarming script and talented cast.

Second place is A General, a Scholar, and a Eunuch <超時空男臣>, a time traveling comedy about three Ming Dynasty court officials who were warped into modern-day Hong Kong as they go on a search for their lost princess. Starring Edwin Siu (蕭正楠), Raymond Cho (曹永廉), and Matthew Ho, A General was both a ratings hit and a trending series when it aired in Hong Kong this past summer. It averaged 26.8 points.

Number one on TVB’s most-watched list is no other than The Unholy Alliance <同盟>, the answer to last year’s A Fist Within Four Walls <城寨英雄>. Created by Four Walls producer Jazz Boon (文偉鴻), the martial arts drama saw TV King and Queen duo Ruco Chan (陳展鵬) and Nancy Wu (胡定欣) returning as the lead stars, costarring Film Queen Nina Paw (鮑起靜) in her first TVB drama. The Unholy Alliance easily defeated all other TVB dramas that aired this year, averaging 28 ratings points during its broadcast run. It was not produced with a high budget, but its connection with Four Walls definitely helped with the promotion. On the other hand, big-budget dramas and carefully-crafted productions like My Unfair Lady <不懂撒嬌的女人> and the co-production Line Walker: The Prelude failed to outrun its local competitors. My Unfair Lady received praises on all fronts—the high-budget camerawork and no-studio filming style definitely earned many praises from critics, but it averaged only 24 points during its broadcast run. The show did, however, give Jessica Hsuan (宣萱) her first TV Queen honor since 1999’s Detective Investigation Files IV <刑事偵緝檔案IV>.

Can you think of any other examples of successful low-budget TVB dramas?

TAGS: A General A Scholar and A Eunuch, Line Walker: The Prelude, My Unfair Lady, The Exorcist's Meter, The Unholy Alliance, Tiger Mom Blues, TVB

10 comments to TVB Ratings Report: Big Budget Does Not Equate to Big Ratings