Natalie deliberately ignored Vincent to get into character for “The Man Who Kills Troubles”.

After a successful collaboration in the well-received My Unfair Lady <不懂撒嬌的女人>, Vincent Wong (王浩信) and Natalie Tong (唐詩詠) pair up as ill-fated lovers in The Man Who Kills Troubles <解決師>. Vincent plays a triad member turned secondary school form teacher named O Sir who falls for the daughter of a powerful triad leader, played by Natalie. Due to her complicated background, the pair’s romance failed to blossom.

Deliberately Ignored by Natalie on Set

In order to set the right mood for her onscreen role, Natalie intentionally treated Vincent coldly on set. She explained, “This time the characters are all different, but sadly we don’t have a perfect ending again! Every time I collaborate a second time with the same actor, I want to create a different feeling. Seeing how Jovy had detested O Sir for a while in the script, I decided to refrain from talking to Vincent on set – since we were very close in real life yet we have to create a distant mood.” While she assumed that she had mentioned her strategy to Vincent, the latter was confused about Natalie’s behavior and even thought he had offended her unknowingly, which she felt apologetic about.

Vincent also shared how he had put in much effort on the action scenes in The Man Who Kills Troubles, especially taking up boxing to play his role as a trained officer convincingly and working with the martial arts instructor to create a refreshing onscreen performance. Although it was tough, Vincent improved his reflexes, flexibility, and speed through the process. Recalling a scene when he injured his nose on set, he described how the crew helped stop his nosebleed though he was forced to take a few days’ rest. The doctor said his frontal nose and nasal bones were accidentally shifted. Thankfully Vincent has since recovered. 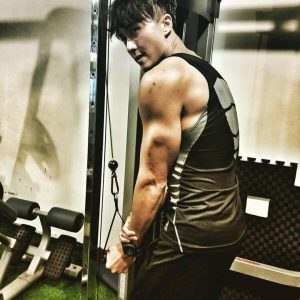 While Vincent started working out to meet the requirements of his roles and for his perfectionist bodily ideals, keeping fit required much perseverance. The 36 year old had tried working out until he vomited due to insufficient sleep and also training so much that he felt dizzy and had to take a half-hour rest in the toilet once.

In response to sharp-eyed netizens who realized that the actor had appeared shirtless in nine consecutive dramas, he explained, “Hope everyone doesn’t mind that I have many shirtless scenes. It is fitting for the storyline. I hope everyone will pay more attention to my roles.”

Talking about his character O Sir, Vincent said that his friendly manner with his student is similar to his relationship with his daughter in real life. “[My daughter] had addressed me wrongly as her friend before. We communicate easily and she would share with me about school. I don’t have to be a stern father figure and would analyze the consequences if she does something, so she will naturally pick a direction she enjoys. This is better than restricting her in many ways. Moreover, I don’t know how to be so tough and stringent.” said the father of one.

For the single Natalie, she admits to being an otaku, especially since she adopted a newborn kitten from actor Billy Luk (陸永). Already owning two cats aged 16 and 14 years old, she brought home a cat with multi-colored fur which appeared to have a timid personality. Playing surrogate mother to the kitten, Natalie woke up very early to feed it milk before it could eat on its own, and took many photos with the kitten every day as “it grew up very quickly” and she did not want to miss anything.

The 38-year-old actress also shared how she had a deeper appreciation of life during the month when she was forced to make medical decisions for her other pet cat, who suddenly became handicapped in one leg. “Some friends told me that he shouldn’t be operated on as he was already old, but I didn’t want to give up on him. I told the vet, even if it was just to prolong his life for a day, I was willing to spend what it took to treat him as long as the operation didn’t worsen his pain.” After the vet removed a third of the cat’s bladder, it recovered well.

This experience made Natalie appreciate not just her pets but also her family and friends more, and prompted her to see awards as a mere encouragement rather than an end goal. She shared her new career perspective,“Many things are not within our control. The most important thing to me now are not the end result, but the process.”