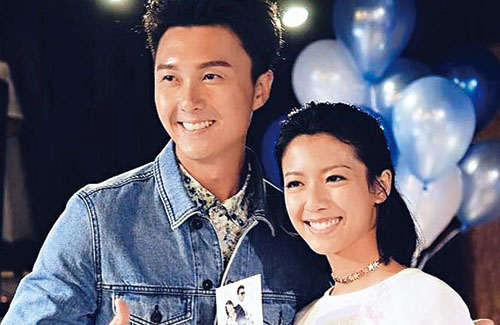 Vincent Wong (王浩信) is Hong Kong’s latest idol to hit the mainstream scene, but the 34-year-old was never single for his fans. The Over Run Over <EU超時任務> star married fellow 36-year-old TVB actress Yoyo Chen (陳自瑤) in 2011, and together the couple have a five-year-old daughter.

The tabloids haven’t been easy on Vincent. A source said that Vincent’s new fame has allegedly put a toll on his relationship with Yoyo, pushing the couple to consider divorce. The source says the couple are now living separately.

Besides Yoyo, Vincent has been linked with several actresses. Last year, while filming Legal Mavericks <踩過界> with Sisley Choi (蔡思貝), paparazzi spotted Vincent and Sisley eating hotpot together in a “locked” VIP room. However, Vincent clarified at an event on September 30 that he didn’t eat with Sisley alone, as they were with their fellow cast members.

“I wouldn’t do such a thing to hurt [my image]!” said Vincent in regard to his cheating rumors with Sisley.

Vincent also told reporters to not worry about his relationship with Yoyo, saying that they are fine. Asking if he has done anything to upset Yoyo, he said, “Of course not! But I am not a good husband. Because of my work, I haven’t had time to stay home and spend my time with her.”

Regardless, it does appear that Vincent and Sisley are quite close. A few nights ago, a tabloid magazine spotted Vincent dropping by Sisley’s home in North Point. He parked his car inside a garage and did not leave the facility until two hours later.

A few nights ago, a tabloid magazine spotted Vincent dropping by Sisley’s home in North Point.