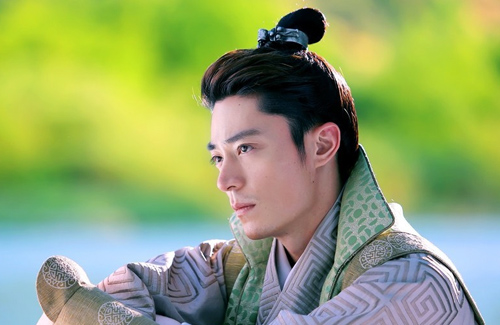 After years of starring in Taiwanese idol dramas, Wallace Huo (霍建華) turned to the mainland Chinese television industry in an attempt to shed the “idol actor” label. With his first drama production, Perfect Couple <金玉良緣>, currently broadcasting on Jiangsu and Shenzhen Satellite TV, Wallace took a look back at his career path in an interview with Tencent Entertainment.

When Wallace made his entertainment industry debut in 2002, he was seen as the paradigm for Taiwanese pretty boys. In one year alone, he filmed seven idol dramas, becoming known for his roles in At the Dolphin Bay <海豚灣戀人> and 100% Senorita <千金百分百>. However, he was dissatisfied with being just an idol actor and decided to head to mainland China to change his public image.

Since then, his career has gone through many ups and downs, but many people still consider him an idol actor. Wallace admitted that he used to struggle with such a label, but his mentality has changed a lot in recent years. “No matter what other people say, I won’t doubt myself,” he said. “If I do doubt myself, I might end up leaving the profession.

“Being good-looking doesn’t mean your acting isn’t good,” he went on. “I’m not the best. But I really like acting, because through acting, I can explore a different side of myself.”

Experiences as a First-Time Producer

Through Perfect Couple, Wallace has also been exploring the responsibilities of a first-time TV producer. The experience was enjoyable but also quite tiring, since he is accustomed to focusing only on his acting duties on set.

As the producer, Wallace had to pay attention to some of the smaller jobs, such as picking up garbage, setting up tables, and buying water for the cast and crew. The work reminded him of the time he was employed as an assistant for a Taiwanese TV program, where he frequently bought water and betel nuts for the other workers.

Wallace also had to keep an eye on the business-related aspects of TV production, such as whether he could sell the drama’s rights for a good price or how high the ratings were. Nevertheless, he believes that Perfect Couple will not perform too poorly. “The storyline isn’t too complicated and won’t be too difficult for viewers to watch, and the romance is also relaxed,” he explained. “I don’t know how many people will like it after it airs, but I believe it has its selling points.”

Netizens have long since hoped for a real-life relationship between Wallace and his Perfect Couple costar, Tiffany Tang (唐嫣), with whom he first collaborated in Chinese Paladin 3 <仙劍奇俠傳3> five years ago. The two were recently spotted attending a concert together, though when asked about it, Wallace simply smiled and said, “We really are very good friends, and our personalities are quite fitting.”

Although Wallace is known for keeping details about his private life on the down-low, he said it is understandable for fans to be curious about celebrities’ private lives. “If they want to ask, then ask,” he said. “Whether I reply, or how much I say, is up to me.

“In terms of my private life, I don’t have much to say,” he mused. “Apart from filming, my life is rather simple.”