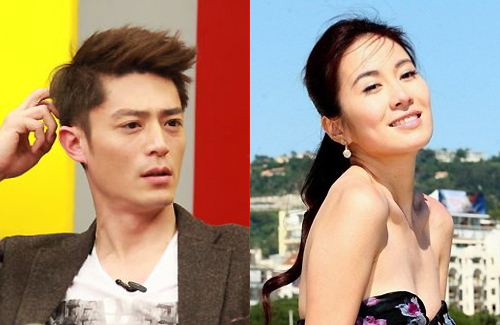 Dating rumors between Wallace Huo (霍建華) and Michelle Ye (葉璇) sparked when the pair were caught walking together in Hengdian in the rain this week. Since their 2005 Mainland collaboration, World’s Finest <天下第一>, Wallace and Michelle have remained close. Although many hoped that Wallace and Michelle were dating, Wallace replied that they were only enjoying each other’s company as friends.

A crew member who once worked on the World’s Finest set revealed that though Wallace and Michelle rarely displayed their affections, Wallace was very sensitive of Michelle’s needs. He knew that Michelle loved to eat crabs, so he asked a friend to ship fresh crabs from the sea for Michelle. Michelle’s adoration for small pets also influenced Wallace somewhat, and it was known that both had adopted street dogs.

Wallace and Michelle have not starred together since World’s Finest, but many netizens, who refer to the duo as “The Golden Couple”, are still hoping for a possible reunion in the future. Last June, a self-claimed insider leaked that Michelle and Wallace had been dating for a month. At the time the rumors spread, it was speculated that Wallace had dated Ruby Lin (林心如) for many years, but the couple broke up due to severe differences.

Earlier this week, Michelle was spotted waiting in front of a hotel entrance alone. A car pulled up in front of her and Michelle quickly welcomed the man, who turned out to be Wallace. She held onto his arm as they walked into the building. Wallace and Michelle booked a pool table inside a pub. They were seen looking at each other’s phones and giggling at each other before they decided to play pool. It was also reported that Wallace was being extremely flirty and teased Michelle.

Afterwards, the pair was photographed taking a night stroll in the rain at Hengdian World Studios. In the photos, Michelle was seen linking arms with Wallace while the latter was holding up an umbrella.

With his good looks and popularity, Wallace had gone through many rounds of rumor mills in the past. He was linked with veteran actress Rosamund Kwan (關之琳) while they were shooting Hands in the Hair <做頭>, but these rumors were never publicly clarified. There were also reports that he had fallen in love with Angela Chang (張韶涵), but Wallace explained that he got too immersed into his character while they were shooting the drama At Dolphin Bay <海豚灣戀人>. In recent years, Wallace was also rumored to have dated Ruby Lin and Tiffany Tang (唐嫣). Though the gossip appeared convincing, the only actress Wallace admitted that he dated was Taiwanese actress, Joe Chen (陳喬恩).

Wallace Claims Michelle is Only a Friend

On speculations that Wallace is dating Michelle, his representative clarified, “They have been friends for many years. They met up because of work, and Wallace is still currently single.” Both artistes have become television drama producers, and have many insights to share regarding work. The representative indicated that many artistes concurrently film at Hengdian World Studios, and it is also not uncommon for them to be staying at the same hotel.

Michelle’s manager, Miss Wong, indicated that she is unclear about the incident and did not issue a response.