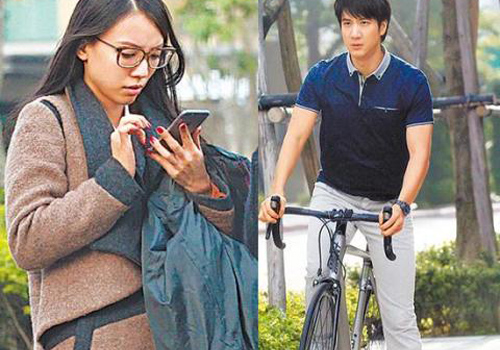 Could baby number two be on the way for Leehom Wang (王力宏) and Lee Jinglei (李靚蕾)? The couple, who tied the knot in late 2013, had their daughter Jiali last July.

Since the birth of their daughter, Leehom had hinted that he wanted to have more children. Promoting for his new album Your Love <你的愛>, Leehom said he wanted to have “a band of kids; a lead vocalist, a guitarist, a drummer, a harmony vocalist, a bassist. Four spots are still missing.” At the Huading Awards held recently in Macau, Leehom said he needed to “catch up” to his Blackhat costar Chris Hemsworth, who has three children with actress Elsa Pataky.

On January 20, Leehom was spotted filming a watch commercial at a park in Neihu District, Taipei. His wife accompanied him to the shoot. Jinglei, who wore a pair of large reading glasses, looked slightly tired. She chatted with some female staff while Leehom was finishing the shoot.

After giving birth to their daughter Jiali, Jinglei was praised for her ability to get back in shape to her pre-pregnancy body quickly. However, at the commercial shoot yesterday, Jinglei appeared fuller and rounder. Wearing a long thick coat, Jinglei held onto a male-sized jacket in front of her throughout Leehom’s shoot. Reporters noticed that Jinglei’s belly looked rounder than before, leading to speculation that she may be pregnant with her second child.

In regards to this, Leehom’s manager said, “I don’t think so! Maybe it’s because she was hunching her back? Even if Leehom wants to have more [children], he has no time. He’s too busy with his new album!”