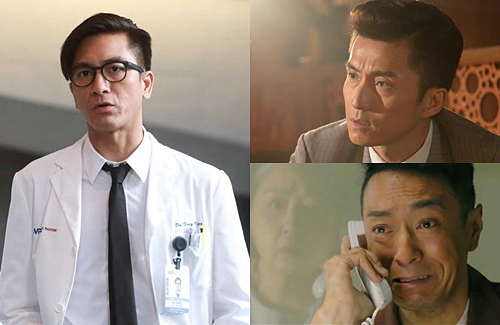 The TVB Anniversary Awards will be held on January 12, 2020 and the contenders for the TV Kingface a stiff battle. The top three favorite nominees this year include Kenneth Ma (馬國明) for Big White Duel (白色強人), Joel Chan (陳山聰) for Barrack O’Karma (今宵大廈) and Philip Keung (姜皓文) for The Defected (鐵探). While this is the first time that Joel and Philip are nominated for the coveted title, this is Kenneth’s 12th nomination.

This year, Kenneth’s character in Big White Duel was well received for his captivating relationship with Natalie Tong (唐詩詠) and Ali Lee (李嘉馨). This role even helped Kenneth win the Best Actor Award in Singapore in November and is definitely a good boost to his confidence.

Waiting to win TV King in his 12th nomination, Kenneth’s acting has seen steady improvements with each drama. The 45-year-old actor joined TVB after completing its 14th annual acting class and was initially a supporting artiste. It wasn’t until Kenneth’s performance in A Fistful of Stance <鐵馬尋橋> in 2010 that helped him become a household name and propelled him to leading status.

In 2017, Kenneth was favored to win TVB King for his role in The Exorcist’s Meter <降魔的>, however the title ultimately ended up in Vincent Wong’s (王浩信) hand for Legal Mavericks <踩過界>. Hoping to break his curse as second-best, Kenneth may finally get his breakthrough.

Although Joel has been in the entertainment industry for 26 years, it wasn’t until his starring role in Barrack O’Karma that shot him to the peak of his popularity. In the drama, Joel and co-star Selena Lee (李施樺) play star-crossed lovers spanning across decades. Showcasing his emotional acting, Joel challenged himself by portraying two characters from two different time periods, and has a good chance of winning TVB King.

Joel’s road to stardom has not always been easy. Joining TVB in 2000, Joel started as a supporting actor before rising to second lead actor in 2009. However, in 2011, Joe hit a snag when he was branded as a gold digger for getting involved with wealthy heiress Florinda Ho (何超雲) while married to his ex-wife Ponny Yeung (楊渡萍). Criticized for prioritizing his relationship over his career, Joel eventually ended losing both his career and relationship when he broke up with Florinda after their two years of courtship.

Joel slowly rebuilt his career after his role in Noblesse Oblige <宦海奇官> and eventually won Best Supporting Male Actor for The Unholy Alliance (同盟) in 2017.

As a seasoned actor, Philip has been in the entertainment industry for 33 years and recently made the jump from film to television. In The Defected, many viewers praised Philip his effortless acting skills and his ability to convincingly show depth in his emotions.

The 53-year-old actor started his career with ATV and often played extras before gaining prominence in supporting roles. In 2017, Philip won his first award, Best Supporting Male Actor, for his performance in the movie Shock Wave <拆弹专家>. In recent years, Philip has been headlining films and appeared in last year’s critically-acclaimed Tracey (翠絲)