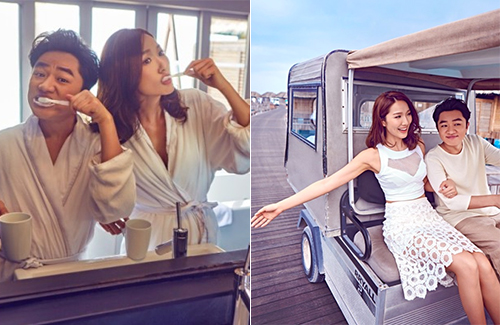 Busy with his countless film, variety, and drama projects, Wong Cho-lam (王祖藍) never has time for himself, let alone for his family. It’s been said that even his wife, actress Leanne Li (李亞男), had to schedule an appointment through Cho-lam’s manager in order to have dinner with him.

But after years of blood, sweet, and tears, Cho-lam and Leanne, who got married on February 14, 2015, has finally found the time to spend their second anniversary peacefully and romantically. The “short-tall couple”, as they are known, spent their anniversary weekend in the Maldives, free from the pressure of work back at home. Cho-lam and Leanne’s agency shared a few pictures they took in the tropical island on social media, warming the hearts of many fans.

The pictures they took were professionally done. They did their photoshoot along the ocean’s shore and in their hotel’s bathroom. Leanne showed off her beautiful figure, while Cho-lam showcased his quirky image. On February 14, also their second anniversary, the couple left the islands to New York City, USA, where they watched a broadway musical.

It was definitely an anniversary worth remembering—maybe they’re thinking about chasing a baby, too?

Check out their beautiful photoshoot below!