Cho Lam was asked to answer truthfully on a series of difficult questions. When asked whom would he save if his wife Leanne Li (李亞男) and two daughters all fell into the water, he did not hesitate and replied that he would save his youngest daughter. When questioned why he would not save his wife first, he Lam joked, “It will be pitiful if the youngest drowns. My wife is older. If she can’t swim, she deserves it.”

In the next question, Cho Lam was asked what he would do if his daughters walked into his bedroom while he was being intimate with Leanne. He replied, “I will continue! My daughters are so young. They don’t know anything, so why should I stop?” However, Wong Cho Lam added that his elder daughter knows how to record videos with a cellphone, so he would have to be careful with his private life. 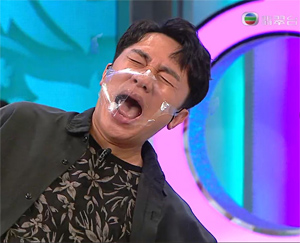 The highlight of the program occurred when Cho Lam was hooked to a childbirth simulator and experienced the pain of going into labor. Since his pain tolerance was compared to other celebrity guests, the star proudly boasted that he can withstand the pain and aimed to set a new record.

However, Cho Lam quickly learned that childbirth is not a joking matter, and turned green from the simulated pain. As the pain intensified, he cried to the hosts for help, “You can increase the pain slowly–I can give you overtime pay.” It did not take long before he begged the hosts to stop the simulator completely, and the studio burst out in laughter.

In the same episode, Alex Fong (方力申) bought his parents to the studio and they confessed to wanting to see him getting married. Although Alex turned red from the topic, his parents admitted that they tried to help him find a suitable partner and shared their criteria for an ideal daughter-in-law.

Alex’s father shocked everyone when he shared that Alex previously brought Natalie Tong (唐詩詠), Jeannie Chan (陳瀅), and Crystal Fong (馮盈盈) home to meet them. Caught off-guard by the surprising revelation, Alex turned flabbergasted and quickly tried to explain himself.