Happily married for three years, Wong Cho Lam (王祖藍) and Leanne Li (李亞男) welcomed their daughter, Gabrielle, last December. During their dating period, many questioned their relationship because of their height difference. However, Wong Cho Lam revealed in an interview that he worked really hard to win Leanne’s heart. Even though his fame is growing, his heart is always with his wife.

Revealing his feelings when he first pursued Leanne, Cho Lam said they were first friends. When he said he wanted to date her, Cho Lam was initially rejected by Leanne. They didn’t stay in touch for three years.

“I have thought before I wasn’t good enough for Leanne. With her age, I thought she would like the Leehom Wang (王力宏) type, and never me. Most men don’t chase the girl they like because they are scared of rejection, or they know that they don’t stand a chance. But for me, I had to try even though I knew there was a chance of rejection because she is wonderful. That time when she initially rejected me, I cried nonstop. Although I was prepared to be rejected and I let go of my pride, I was still devastated because I really like her a lot. She almost became [my girlfriend].”

Luckily for him, Cho Lam eventually won Leanne’s heart through his wonderful personality. The couple tied the knot in 2015. He really wanted to thank God for allowing Leanne to become his wife. He said, “There was a period where I wanted to forget her because I knew I wasn’t good enough. But my church had a trip to the United States, and coincidentally enough, she was there too. To be honest, she was supposed to join Strictly Come Dancing <舞動奇蹟> but she couldn’t dance, so she chose to go on this trip instead. It turns out we both mutually loved each other for the past three years, but neither one of us wanted to confess. Since we found out the truth, we decided to be together.”

In their marriage, Cho Lam had to constantly work, which meant staying in Mainland China for over three months. Although he has many friends looking out for Leanne when he is away, Leanne started developing anxiety, which affected her mental health. Cho Lam shared that even though he is away, he is still very loyal to his wife. He believes that he could never be tempted by a woman flirting with him. His 10-year relationship with Leanne is too strong and he loves his family very much. 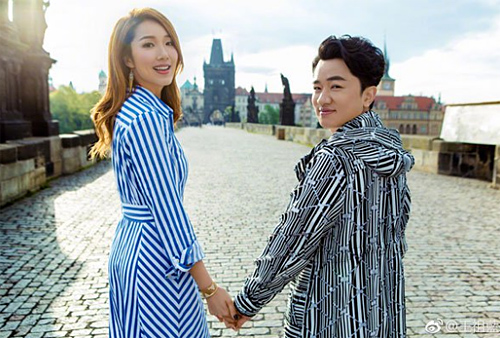