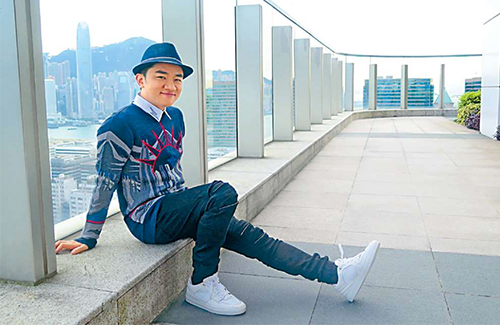 It was all thanks to 2013’s Inbound Troubles <老表，你好嘢！> that made Wong Cho-lam (王祖藍) into the person he is today. The 36-year-old actor, who has own agency and production studio, said the success of Inbound Troubles gave him the confidence to seek out new endeavors.

Aside from managing himself and his wife Leanne Li (李亞男), Cho-lam’s studio also manages Sheren Tang (鄧萃雯), Kate Tsui (徐子珊), and Mag Lam (林欣彤). His studio currently has ten green lighted projects, all which will officially begin production next year.

“Our projects include television dramas, web series, movies, web films, variety shows, and more,” said Cho-lam. “There’s a different level of involvement in all of these projects, but I always keep myself involved. I’ve been pretty busy with meetings lately.”

It took Cho-lam 13 years to work his way up from being a mere stage performer to the owner of a fast-rising entertainment business. He feels successful and satisfied.

“I do not intend to be an entertainment tycoon,” said Cho-lam. “I don’t need to be the biggest thing in the market, but I would love to see my company getting listed in the stock exchange. That will be my goal.”

Empathizes with His Artists

Cho-lam did not think about starting his own artist agency when he opened up his studio. He said, “At the time, the studio was only meant for me and Leanne. I decided to work with Shaw Brothers because I wanted to be able to produce more movies. But after going through the writing and casting process of Inbound Troubles, I’ve realized how satisfying it was to work with artists too.”

The crew of Inbound Troubles introduced Cho-lam to a manager from Mainland China, who offered tips to Cho-lam on starting his own artist agency. Cho-lam was hesitant at first, but decided to take on the challenge in the end.

“I am an artist myself, so I know how it feels like,” said Cho-lam. “I know many artists want greater freedom. I’ve told my artists to do whatever they want to do. The company will handle everything else.”

“Inbound Troubles 3” Will Be About Education

In November, Cho-lam will officially start production on his new drama Inbound Troubles 3, the third series to Cho-lam’s Inbound franchise. It will continue to feature Roger Kwok (郭晉安), who starred in the franchise’s last two installments.

Cho-lam introduced, “There’s been some controversy about teacher depressions, student suicides, and the parents are all very concerned. They really want to probe into some of the problems of our education, and I hope the comedic style of Inbound 3 can help them achieve that. This drama will feature a new story entirely, but previous characters may return. Ada Choi (蔡少芬), Joyce Cheng (鄭欣宜), and Babyjohn (蔡瀚億) are some of our new additions.”