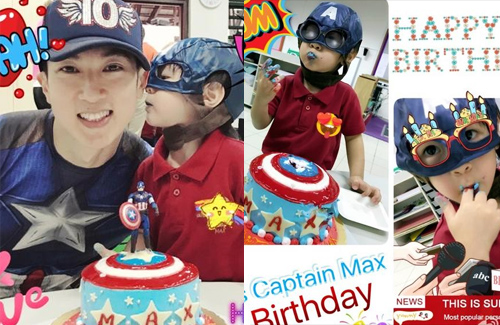 Taiwanese actor and singer Wu Chun (吳尊) is known for keeping his personal life very private, choosing to keep his marriage a secret for years until his shocking announcement in 2013.  However, the 37-year-old delighted his fans recently when he shared photos of his son’s 3rd birthday celebration.

Since his son, Max, is a fan of Captain America, the birthday party had an Avengers theme. Although Max’s face was partially hidden by glasses and a hat, his resemblance to Wu Chun’s handsome looks was still noted. Many fans gave heartwarming birthday wishes and complimented on Max’s cuteness as well.

Wu Chun wrote, “Today is his third birthday…I suddenly felt like sharing this with everyone – he is Nei Nei’s brother – his name is Captain Max and he’s super cute. However, he is a lot more energetic than Nei Nei. They are both my precious babies – it’s the best thing ever!”