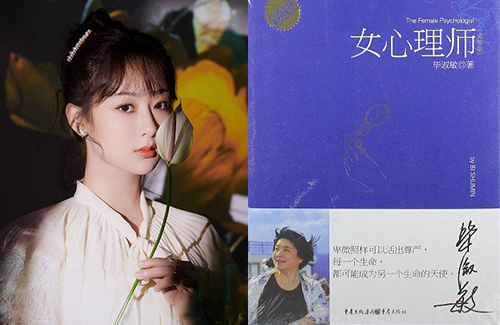 It’s been reported that Yang Zi (杨紫) will be starring in the upcoming TV drama The Female Psychologist <女心理师>, adapted from the novel of the same name by Bi Shumin (毕淑敏). The novel is one of Bi’s more popular novels, with over 20 million views online.

While these reports have not been confirmed by official parties, Bi recently followed The Female Psychologist’s official Weibo account, as well as Yang Zi. She is the only actress Bi follows on social media.

Yang Zi is one of China’s most popular actress. Best known for starring in the Ode of Joy <欢乐颂> series and Noble Aspirations <诛仙‧青云志>, Yang Zi most recently starred in the highly popular Go Go Squid <亲爱的，热爱的>, and her upcoming dramas The Oath of Love <余生，请多指教> and The Golden Hairpin <青簪行>—which also stars Kris Wu (吴亦凡)—are expected to be ratings hits.