Yoyo Chen Denies Vincent Wong Divorce Reports: “None of It is True” 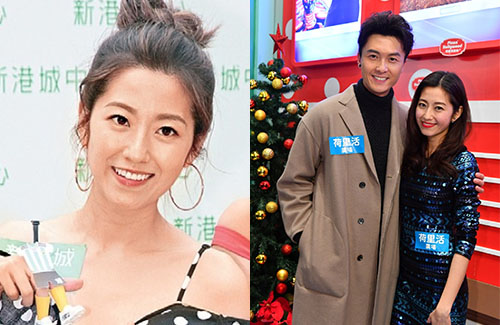 The past few weeks have been plagued with news reporting that Vincent Wong (王浩信), 34, and Yoyo Chen (陳自瑤), 36, are at the brink of divorce. There’s been talk that the couple, who have been married since 2011, were experiencing problems in their marriage and are already living separately. Their 6-year-old daughter is also reportedly living with her grandparents.

In her first public appearance since the rumors first started, Yoyo denied all reports about their succumb to marital change. However, the actress was not wearing her wedding ring at the event.

“I really don’t know how a situation that even I don’t know about could be written in such a realistic fashion,” said the TVB actress. “Everyone has such creative minds.”

Yoyo then clarified that rumors of their separation were all false. “One, I never brought up divorce. Two, I never kicked my husband out of the house. And three, our little girl is still living with us. I don’t how these rumors started, but I want to say now that none of those stories were true.” Asking why Vincent had to move into a different apartment in their building, she said, “You can say that it’s his office. Besides being an actor, he also does business… sometimes it’s not as convenient for him to do it around the house.” On the reports that Vincent purchased a new apartment for his mother instead of for her, Yoyo said Vincent did tell her about it, and she supports his decision.

However, when Yoyo was asked if her relationship with Vincent is still loving, she said, “We never changed. Still husband and wife.” Pointing out that she’s not wearing her wedding ring, Yoyo explained, “I actually don’t wear it often! When we’re working or filming, we usually don’t wear the ring. It could get lost, so I don’t wear it.”

In regard to the rumor that Vincent had neglected her after winning TV King last year, she said, “That’s reasonable. He’s doing well in his career, and I am very happy for him. I also had a period of time when I filmed a lot. Maybe I neglected him then!”

Yoyo was unclear in her response about Vincent’s recent social media post, which showed their daughter drawing a picture. Asking if Yoyo was the one who was holding the camera, she said, “Maybe!” She added that they rarely upload family photos on social media anyways.

The actress did not wish to respond to any more questions about their marriage, saying, “The more I respond, the more people are going to talk.”

2 comments to Yoyo Chen Denies Vincent Wong Divorce Reports: “None of It is True”