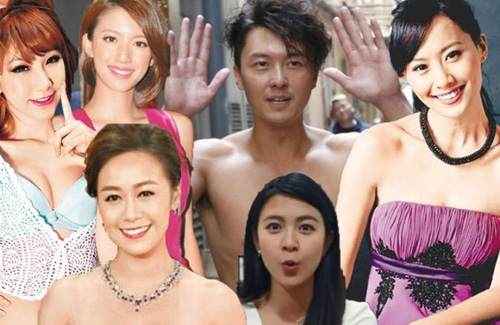 Vincent Wong (王浩信) and Yoyo Chen’s (陳自瑤) marriage has been rumored to be on the rocks for a while now. Married since 2011, the couple is reportedly headed towards a divorce. Prior to his marriage with Yoyo, Vincent was already known as a party-goer and womanizer. The birth of the couple’s daughter, Wong Ching Kiu (王靖喬), seemed to have quelled Vincent’s romantic curiosity, but not for long before his romantic rumors with co-stars started once again.

While still dating Yoyo in 2011, Vincent was rumored to be secretly seeing Cammi Tse (謝芷蕙). He was photographed chauffeuring Cammi back to his home, where she stayed for more than five hours before seen leaving at 5 a.m. Vincent later claimed that he was hosting a party with a group of friends.

In 2015, Vincent was romantically linked to his With or Without You <東坡家事> costar, Jacqueline Wong (黃心穎). At the time, Yoyo expressed her trust in Vincent.

Perhaps one of the most hotly discussed gossip was with Sisley Choi (蔡思貝). The romantic rumors began when Vincent and Sisley costarred in the popular 2017 drama, Legal Mavericks <踩過界>. In addition to being spotted having a hotpot date together, Vincent was also photographed entering Sisley’s residential building. This was coincidentally around the time when Vincent and Yoyo were reportedly living separately. The rumors became so relentless that Yoyo had to make a public appearance to deny the rumors and stand by her husband.

Most recently, the 34-year-old actor was romantically linked to Kaman Kong (江嘉敏). The two costarred in the new drama, Fist Fight <兄弟>. It was alleged that the two grew close in England, where they filmed the drama.

Perhaps lesser known is his alleged romantic history with Fala Chen (陳法拉). The two reportedly met when they were both still attending school in the United States. However, Vincent returned to Hong Kong before finishing school. The long distance caused a rift between the pair, leading to their eventual separation.